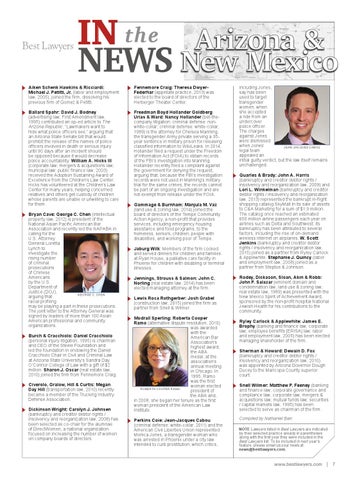 Fennemore Craig: Theresa DwyerFederhar (appellate practice, 2013) was elected to the board of directors of the Herberger Theater Center.

Ballard Spahr: David J. Bodney (advertising law; First Amendment law, 1995) contributed an op-ed article to The Arizona Republic, “Lawmakers want to hide what police officers see,” arguing that an Arizona State Senate bill that would prohibit the release of the names of police officers involved in death or serious injury until 90 days after an incident should be opposed because it would decrease police accountability. William A. Hicks III (corporate law; mergers & acquisitions law; municipal law; public finance law, 2003) received the Adoption Sustaining Award of Excellence from the Children’s Law Center. Hicks has volunteered at the Children’s Law Center for many years, helping concerned relatives and others get custody of children whose parents are unable or unwilling to care for them.

Freedman Boyd Hollander Goldberg Urias & Ward: Nancy Hollander (bet-thecompany litigation; criminal defense: nonwhite-collar; criminal defense: white-collar, 1989) is the attorney for Chelsea Manning, the transgender Army private serving a 35year sentence in military prison for releasing classified information to WikiLeaks. In 2014, Hollander filed a request under the Freedom of Information Act (FOIA) to obtain records of the FBI’s investigation into Manning. Hollander recently filed a complaint against the government for denying the request, arguing that, because the FBI’s investigation records were not used in Manning’s military trial for the same crimes, the records cannot be part of an ongoing investigation and are not exempt from release under the FOIA.

Bryan Cave: George C. Chen (intellectual property law, 2012) is president of the National Asian Pacific American Bar Association and recently led the NAPABA in calling for the U.S. Attorney General Loretta Lynch to investigate the rising number of criminal prosecutions of Chinese Americans by the U.S. Department of Justice (DOJ), GEORGE C. CHEN arguing that racial profiling may be playing a part in these prosecutions. The joint letter to the Attorney General was signed by leaders of more than 100 Asian American professional and community organizations.

Gammage & Burnham: Manjula M. Vaz (land use & zoning law, 2014) joined the board of directors of the Tempe Community Action Agency, a non-profit that provides services, including emergency housing assistance and food programs, to the homeless, seniors, children, people with disabilities, and working poor of Tempe.

Jaburg Wilk: Members of the firm cooked and served dinners for children and families at Ryan House, a palliative care facility in Phoenix for children with disabling or terminal illnesses.

Modrall Sperling: Roberta Cooper Ramo (alternative dispute resolution, 2010) was awarded with the American Bar Association’s highest award, the ABA medal, at the association’s annual meeting in Chicago. In 1995, Ramo was the first woman elected ROBERTA COOPER RAMO president of the ABA and, in 2008, she began her tenure as the first woman president of the American Law Institute.

Dickinson Wright: Carolyn J. Johnsen (bankruptcy and creditor debtor rights / insolvency and reorganization law, 2008) has been selected as co-chair for the alumnae of DirectWomen, a national organization focused on increasing the number of women on company boards of directors.

including Jones, say has been used to target transgender women, when she accepted a ride from an undercover police officer. The charges against Jones were dismissed when Jones’ JEAN-JACQUES CABOU legal team appealed an initial guilty verdict, but the law itself remains unchallenged.

Find the best lawyers in Arizona, New Mexico and more for 2016.

Find the best lawyers in Arizona, New Mexico and more for 2016.