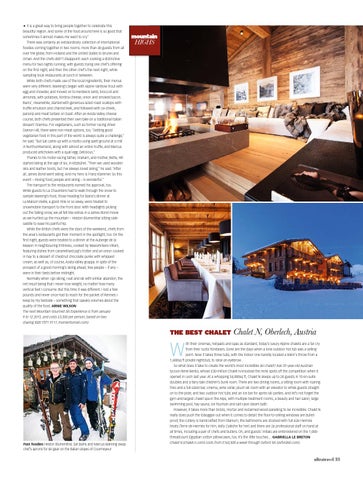 beautiful region. And some of the food around here is so good that sometimes it almost makes me want to cry.” There was certainly an extraordinary collection of international foodies coming together in two rooms: more than 40 guests from all

over the globe, from Holland and the United States to Brunei and Oman. And the chefs didn’t disappoint: each cooking a distinctive menu for two nights running, with guests trying one chef’s offering on the first night, and then the other chef’s the next night, while sampling local restaurants at lunch in between. While both chefs made use of the local ingredients, their menus were very different. Wareing’s began with Alpine rainbow trout with egg and chowder, and moved on to Herdwick lamb, broccoli and almonds, with potatoes, fontina cheese, onion and smoked bacon. Bains’, meanwhile, started with generous-sized roast scallops with truffle emulsion and charred leek, and followed with ox-cheek, parsnip and meat tartare on toast. After an Aosta Valley cheese course, both chefs presented their own take on a traditional Italian dessert: tiramisu. For vegetarians, such as former racing driver Damon Hill, there were non-meat options, too. “Getting good vegetarian food in this part of the world is always quite a challenge,” he said. “But Sat came up with a risotto using spelt ground at a mill in Northumberland, along with almost an entire truffle, and Marcus produced artichokes with a quail egg. Delicious.” Thanks to his motor-racing father, Graham, and mother, Bette, Hill started skiing at the age of six, in Kitzbühel. “Then we used wooden skis and leather boots, but I’ve always loved skiing,” he said. “After all, James Bond went skiing. And my hero is Franz Klammer. So this event – mixing food, people and skiing – is wonderful.” The transport to the restaurants earned his approval, too. While guests to La Chaumière had to walk through the snow to sample Wareing’s food, those heading for Bains’s dinner at La Maison Vieille, a good mile or so away, were treated to snowmobile transport to the front door. With headlights picking out the falling snow, we all felt like extras in a James Bond movie as we hurtled up the mountain – Heston Blumenthal sitting sidesaddle to ease his painful hip. While the British chefs were the stars of the weekend, chefs from the area’s restaurants got their moment in the spotlight, too. On the first night, guests were treated to a dinner at the Auberge de la Maison in neighbouring Entrèves, cooked by Massimiliano Villani, featuring dishes from caramelised pig’s trotter and an onion cooked in hay to a dessert of chestnut chocolate purée with whipped cream, as well as, of course, Aosta Valley grappa. In spite of the prospect of a good morning’s skiing ahead, few people – if any – were in their beds before midnight. Normally when I go skiing, I eat and ski with similar abandon, the net result being that I never lose weight, no matter how many vertical feet I consume. But this time it was different. I lost a few pounds and never once had to reach for the packet of Rennies I keep by my bedside – something that speaks volumes about the quality of the food. ARNIE WILSON The next Mountain Gourmet Ski Experience is from January 9 to 12 2015, and costs £3,500 per person, based on two sharing (020 7371 9111; momentumski.com).

ith their cinemas, helipads and spas as standard, today’s luxury Alpine chalets are a far cry from their rustic forebears. Gone are the days when a lone outdoor hot tub was a selling point. Now it takes three tubs, with the indoor one handily located a bikini’s throw from a

1,400sq ft private nightclub, to raise an eyebrow. So what does it take to create the world’s most incredible ski chalet? Ask 37-year-old Austrian tycoon René Benko, whose £30-million Chalet N knocked the mink spots off the competition when it opened in Lech last year. At a whopping 54,000sq ft, Chalet N sleeps up to 24 guests in 10 en-suite doubles and a fairy-tale children’s bunk room. There are two dining rooms, a sitting room with roaring fires and a full-sized bar, cinema, wine cellar, plush ski room with an elevator to whisk guests straight on to the piste, and two outdoor hot tubs and an ice bar for après-ski parties. And let’s not forget the gym and largest chalet spa in the Alps, with multiple treatment rooms, a beauty and hair salon, large swimming pool, hay sauna, ice fountain and salt-cave steam bath. However, it takes more than bricks, mortar and reclaimed wood panelling to be incredible. Chalet N really does push the toboggan out when it comes to detail: the floor-to-ceiling windows are bulletproof, the cutlery is handcrafted from titanium, the bathrooms are stocked with full-size Hermès treats (Terre de Hermès for him, Kelly Calèche for her) and there are 26 professional staff on hand at all times, including a pair of chefs and butlers. Oh, and guests’ initials are embroidered on the 1,000threadcount Egyptian cotton pillowcases, too. It’s the little touches… GABRIELLA LE BRETON 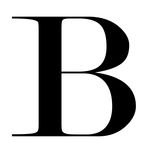