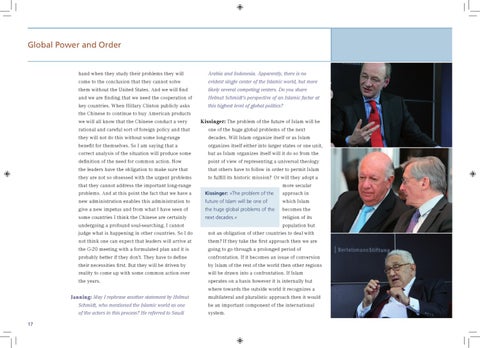 hand when they study their problems they will come to the conclusion that they cannot solve them without the United States. And we will find and we are finding that we need the cooperation of key countries. When Hillary Clinton publicly asks the Chinese to continue to buy American products we will all know that the Chinese conduct a very rational and careful sort of foreign policy and that they will not do this without some long-range benefit for themselves. So I am saying that a correct analysis of the situation will produce some definition of the need for common action. Now the leaders have the obligation to make sure that they are not so obsessed with the urgent problems that they cannot address the important long-range problems. And at this point the fact that we have a new administration enables this administration to give a new impetus and from what I have seen of some countries I think the Chinese are certainly undergoing a profound soul-searching. I cannot judge what is happening in other countries. So I do not think one can expect that leaders will arrive at the G-20 meeting with a formulated plan and it is probably better if they don’t. They have to define their necessities first. But they will be driven by reality to come up with some common action over the years. Janning: May I rephrase another statement by Helmut Schmidt, who mentioned the Islamic world as one of the actors in this process? He referred to Saudi 17

Arabia and Indonesia. Apparently, there is no evident single center of the Islamic world, but more likely several competing centers. Do you share Helmut Schmidt’s perspective of an Islamic factor at this highest level of global politics? Kissinger: The problem of the future of Islam will be one of the huge global problems of the next decades. Will Islam organize itself or as Islam organizes itself either into larger states or one unit, but as Islam organizes itself will it do so from the point of view of representing a universal theology that others have to follow in order to permit Islam to fulfill its historic mission? Or will they adopt a more secular Kissinger: »The problem of the approach in future of Islam will be one of which Islam the huge global problems of the becomes the next decades.« religion of its population but not an obligation of other countries to deal with them? If they take the first approach then we are going to go through a prolonged period of confrontation. If it becomes an issue of conversion by Islam of the rest of the world then other regions will be drawn into a confrontation. If Islam operates on a basis however it is internally but where towards the outside world it recognizes a multilateral and pluralistic approach then it would be an important component of the international system. 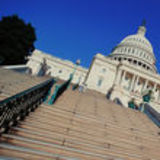