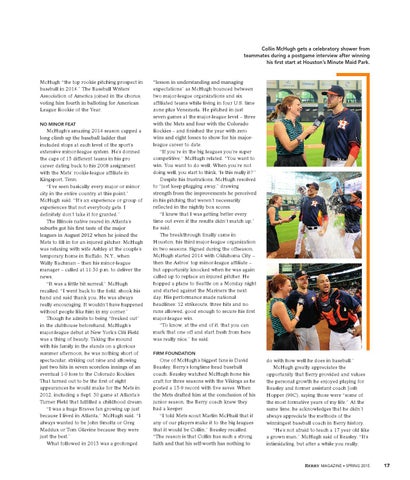 Collin McHugh gets a celebratory shower from teammates during a postgame interview after winning his first start at Houston’s Minute Maid Park.

McHugh “the top rookie pitching prospect in baseball in 2014.” The Baseball Writers’ Association of America joined in the chorus, voting him fourth in balloting for American League Rookie of the Year. No minor feat

McHugh’s amazing 2014 season capped a long climb up the baseball ladder that included stops at each level of the sport’s extensive minor-league system. He’s donned the caps of 15 different teams in his pro career dating back to his 2008 assignment with the Mets’ rookie-league affiliate in Kingsport, Tenn. “I’ve seen basically every major or minor city in the entire country at this point,” McHugh said. “It’s an experience or group of experiences that not everybody gets. I definitely don’t take it for granted.” The Illinois native reared in Atlanta’s suburbs got his first taste of the major leagues in August 2012 when he joined the Mets to fill in for an injured pitcher. McHugh was relaxing with wife Ashley at the couple’s temporary home in Buffalo, N.Y., when Wally Bachman – then his minor-league manager – called at 11:30 p.m. to deliver the news. “It was a little bit surreal,” McHugh recalled. “I went back to the field, shook his hand and said thank you. He was always really encouraging. It wouldn’t have happened without people like him in my corner.” Though he admits to being “freaked out” in the clubhouse beforehand, McHugh’s major-league debut at New York’s Citi Field was a thing of beauty. Taking the mound with his family in the stands on a glorious summer afternoon, he was nothing short of spectacular, striking out nine and allowing just two hits in seven scoreless innings of an eventual 1-0 loss to the Colorado Rockies. That turned out to be the first of eight appearances he would make for the Mets in 2012, including a Sept. 30 game at Atlanta’s Turner Field that fulfilled a childhood dream. “I was a huge Braves fan growing up just because I lived in Atlanta,” McHugh said. “I always wanted to be John Smoltz or Greg Maddux or Tom Glavine because they were just the best.” What followed in 2013 was a prolonged

“lesson in understanding and managing expectations” as McHugh bounced between two major-league organizations and six affiliated teams while living in four U.S. time zone plus Venezuela. He pitched in just seven games at the major-league level – three with the Mets and four with the Colorado Rockies – and finished the year with zero wins and eight losses to show for his majorleague career to date. “If you’re in the big leagues you’re super competitive,” McHugh related. “You want to win. You want to do well. When you’re not doing well, you start to think, ‘Is this really it?’” Despite his frustrations, McHugh resolved to “just keep plugging away,” drawing strength from the improvements he perceived in his pitching that weren’t necessarily reflected in the nightly box scores. “I knew that I was getting better every time out even if the results didn’t match up,” he said. The breakthrough finally came in Houston, his third major-league organization in two seasons. Signed during the offseason, McHugh started 2014 with Oklahoma City – then the Astros’ top minor-league affiliate – but opportunity knocked when he was again called up to replace an injured pitcher. He hopped a plane to Seattle on a Monday night and started against the Mariners the next day. His performance made national headlines: 12 strikeouts, three hits and no runs allowed, good enough to secure his first major-league win. “To know, at the end of it, that you can mark that one off and start fresh from here was really nice,” he said. Firm foundation

One of McHugh’s biggest fans is David Beasley, Berry’s longtime head baseball coach. Beasley watched McHugh hone his craft for three seasons with the Vikings as he posted a 13-9 record with five saves. When the Mets drafted him at the conclusion of his junior season, the Berry coach knew they had a keeper. “I told Mets scout Marlin McPhail that if any of our players make it to the big leagues that it would be Collin,” Beasley recalled. “The reason is that Collin has such a strong faith and that his self-worth has nothing to

do with how well he does in baseball.” McHugh greatly appreciates the opportunity that Berry provided and values the personal growth he enjoyed playing for Beasley and former assistant coach Josh Hopper (99C), saying those were “some of the most formative years of my life.” At the same time, he acknowledges that he didn’t always appreciate the methods of the winningest baseball coach in Berry history. “He’s not afraid to teach a 17 year old like a grown man,” McHugh said of Beasley. “It’s intimidating, but after a while you really, 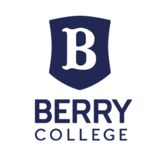