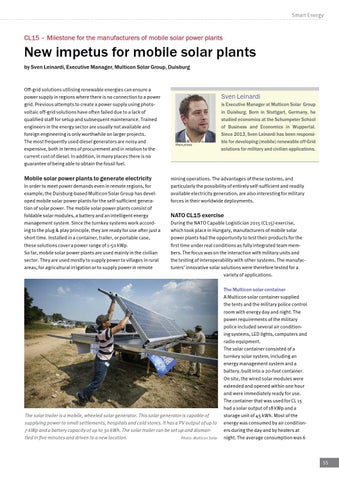 Off-grid solutions utilising renewable energies can ensure a power supply in regions where there is no connection to a power grid. Previous attempts to create a power supply using photovoltaic off-grid solutions have often failed due to a lack of qualified staff for setup and subsequent maintenance. Trained engineers in the energy sector are usually not available and foreign engineering is only worthwhile on larger projects. The most frequently used diesel generators are noisy and expensive, both in terms of procurement and in relation to the current cost of diesel. In addition, in many places there is no guarantee of being able to obtain the fossil fuel.

In order to meet power demands even in remote regions, for example, the Duisburg-based Multicon Solar Group has developed mobile solar power plants for the self-sufficient generation of solar power. The mobile solar power plants consist of foldable solar modules, a battery and an intelligent energy management system. Since the turnkey systems work according to the plug &amp; play principle, they are ready for use after just a short time. Installed in a container, trailer, or portable case, these solutions cover a power range of 1-50 kWp. So far, mobile solar power plants are used mainly in the civilian sector. They are used mostly to supply power to villages in rural areas, for agricultural irrigation or to supply power in remote

is Executive manager at multicon Solar Group in Duisburg. Born in Stuttgart, Germany, he

studied economics at the Schumpeter School of Business and Economics in Wuppertal.

Since 2013, Sven Leinardi has been responsi-

solutions for military and civilian applications.

mining operations. The advantages of these systems, and particularly the possibility of entirely self-sufficient and readily available electricity generation, are also interesting for military forces in their worldwide deployments.

During the NATO Capable Logistician 2015 (CL15) exercise, which took place in Hungary, manufacturers of mobile solar power plants had the opportunity to test their products for the first time under real conditions as fully integrated team members. The focus was on the interaction with military units and the testing of interoperability with other systems. The manufacturersâ&amp;#x20AC;&amp;#x2122; innovative solar solutions were therefore tested for a variety of applications.

the multicon solar container A Multicon solar container supplied the tents and the military police control room with energy day and night. The power requirements of the military police included several air conditioning systems, LED lights, computers and radio equipment. The solar container consisted of a turnkey solar system, including an energy management system and a battery, built into a 20-foot container. On site, the wired solar modules were extended and opened within one hour and were immediately ready for use. The container that was used for CL 15 had a solar output of 18 kWp and a storage unit of 45 kWh. Most of the energy was consumed by air conditioners during the day and by heaters at night. The average consumption was 6 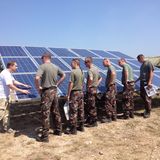