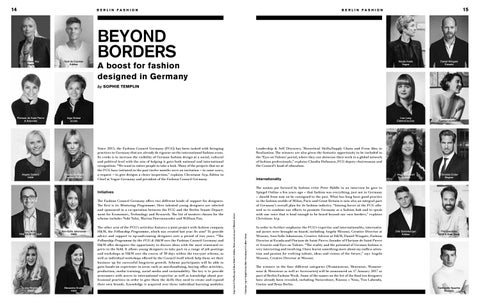 A boost for fashion designed in Germany

Leadership & Self Discovery, Theoretical Skills/Supply Chain and From Idea to Rea­l ization. The winners are also given the fantastic opportunity to be included in the ‘Eyes on Talents’ portal, where they can showcase their work to a global network of fashion professionals,” explains Claudia Hofmann, FCG deputy chairwoman and the Council’s head of education.

Since 2015, the Fashion Council Germany (FCG) has been tasked with bringing practices to Germany that are already de rigueur on the international fashion scene. Its credo is to increase the visibility of German fashion design at a social, cultural and political level with the aim of helping it gain both national and international recognition. “We want to entice people to take a look. Many of the projects that we at the FCG have initiated in the past twelve months were an invitation – in some cases, a request – to give designs a closer inspection,” explains Christiane Arp, Editor in Chief at Vogue Germany and president of the Fashion Council Germany.

The notion put forward by fashion critic Peter Bäldle in an interview he gave to Spiegel Online a few years ago – that fashion was everything, just not in Germany – should from now on be consigned to the past. What has long been good practice in the fashion worlds of Milan, Paris and Great Britain is now also an integral part of Germany’s overall plan for its fashion industry. “Joining forces at the FCG allowed us to combine our efforts to promote Germany as a fashion hub and to speak with one voice that is loud enough to be heard beyond our own borders,” explains Christiane Arp.

The other arm of the FCG’s activities features a joint project with fashion company H&M, the Fellowship Programme, which was created last year. Its aim? To provide advice and support to up-and-coming designers over a period of two years. “The Fellowship Programme by the FCG & H&M sees the Fashion Council Germany and H&M offer designers the opportunity to discuss ideas with the most renowned experts in the field. It allows young designers to take part in a range of job postings and workshops at H&M over the course of 50 days within the two-year scheme, as well as individual workshops offered by the Council itself which help them set their business up for successful long-term growth. Scheme participants will be able to gain hands-on experience in areas such as merchandising, buying office activities, production, media training, social media and sustainability. The key is to provide newcomers with access to international expertise as well as knowledge about professional practices in order to give them the skills they need to create and expand their own brands. Knowledge is acquired over three individual learning modules:

The Fashion Council Germany offers two different kinds of support for designers. The first is its Mentoring Programme. Here talented young designers are selected and sponsored in a co-operation between the FCG and the Berlin Senate Department for Economics, Technology and Research. The list of mentees chosen for the scheme includes Nobi Talai, Marina Hoermanseder and William Fan.

In order to further emphasise the FCG’s expertise and internationality, international jurors were brought on board, including Angela Missoni, Creative Director at Missoni, Ann-Sofie Johannson, Creative Advisor at H&M, Daniel Wingate, Fashion Director at Escada and Floriane de Saint Pierre, founder of Floriane de Saint Pierre et Associés and Eyes on Talents. “The reality and the potential of German fashion is very interesting and involving. I have learnt something more about my endless attention and passion for evolving talents, ideas and visions of the future,” says Angela Missoni, Creative Director at Missoni. The winners in the four different categories (Womenswear, Menswear, Womenswear & Menswear as well as Accessories) will be announced on 17 January 2017 as part of Berlin Fashion Week. Some of the names on the list of the final ten designers have already been revealed, including Steinrohner, Rianna + Nina, Tim Labenda, Goetze and Benu Berlin.