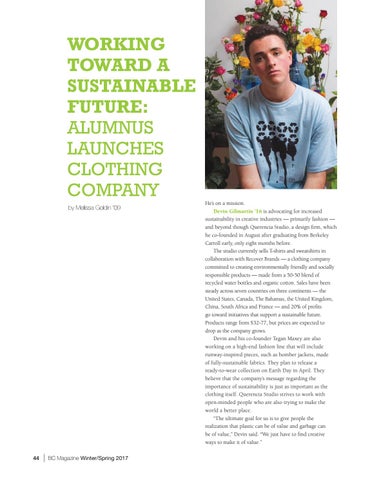 He’s on a mission. Devin Gilmartin ’16 is advocating for increased sustainability in creative industries — primarily fashion — and beyond though Querencia Studio, a design firm, which he co-founded in August after graduating from Berkeley Carroll early, only eight months before. The studio currently sells T-shirts and sweatshirts in collaboration with Recover Brands — a clothing company committed to creating environmentally friendly and socially responsible products — made from a 50-50 blend of recycled water bottles and organic cotton. Sales have been steady across seven countries on three continents — the United States, Canada, The Bahamas, the United Kingdom, China, South Africa and France — and 20% of profits go toward initiatives that support a sustainable future. Products range from $32-77, but prices are expected to drop as the company grows. Devin and his co-founder Tegan Maxey are also working on a high-end fashion line that will include runway-inspired pieces, such as bomber jackets, made of fully-sustainable fabrics. They plan to release a ready-to-wear collection on Earth Day in April. They believe that the company’s message regarding the importance of sustainability is just as important as the clothing itself. Querencia Studio strives to work with open-minded people who are also trying to make the world a better place. “The ultimate goal for us is to give people the realization that plastic can be of value and garbage can be of value,” Devin said. “We just have to find creative ways to make it of value.” 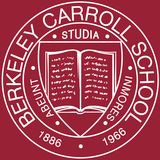