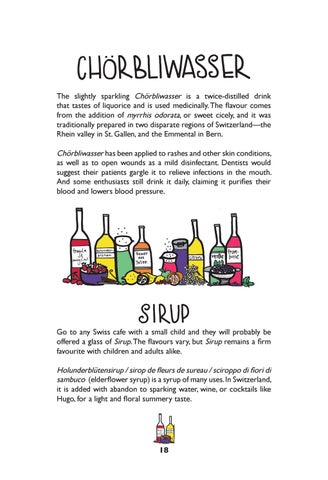 The slightly sparkling Chörbliwasser is a twice-distilled drink that tastes of liquorice and is used medicinally. The flavour comes from the addition of myrrhis odorata, or sweet cicely, and it was traditionally prepared in two disparate regions of Switzerland—the Rhein valley in St. Gallen, and the Emmental in Bern.

Chörbliwasser has been applied to rashes and other skin conditions, as well as to open wounds as a mild disinfectant. Dentists would suggest their patients gargle it to relieve infections in the mouth. And some enthusiasts still drink it daily, claiming it purifies their blood and lowers blood pressure.

Go to any Swiss cafe with a small child and they will probably be offered a glass of Sirup. The flavours vary, but Sirup remains a firm favourite with children and adults alike.

Holunderblütensirup / sirop de fleurs de sureau / sciroppo di fiori di sambuco (elderflower syrup) is a syrup of many uses. In Switzerland, it is added with abandon to sparking water, wine, or cocktails like Hugo, for a light and floral summery taste.

Though it didn’t originate here, Hugo is one of Switzerland’s favourite summer drinks. It happened just across the border—Roland Gruber, a beardy, south Tirolean vagabond barkeep, mixed together Zitronenmelissensirup (lemon balm syrup), Prosecco, mint, and a spritz of soda water, thought up a name off the top of his head, and served it to regulars at his bar in Naturns in 2005. Other than a bit of notoriety, Gruber didn’t really get any compensation for creating what would become one of the most ubiquitous drinks in the German-speaking realm. By 2010, it had spread from Sylt to Schwyz and was a standard summer cocktail at bars, restaurants, and hotels. The ingredients have changed slightly, with many bartenders preferring Holunderblütensirup (elderflower syrup), adding lime, and some replacing the Prosecco with white wine or champagne. Today it remains a refreshing classic on a warm summer’s day.

Of course the national soda pop of Switzerland is made with milk. First produced in 1952, Rivella is one of Switzerland’s most iconic drinks. Its name is a mix of the Italian word rivelazione (revelation) and the Ticino town of Riva San Vitale. It’s made from milk serum (also known as whey), herb and fruit tea extract, water, sugar and fizz. The whey is what makes the drink particularly Swiss. For centuries, dairy farmers enjoyed drinking this by-product of cheese production. This was later adopted as a health product by early Swiss nutritionists. In the 1800s, health tourists to Swiss sanitariums were taking whey baths. The whey that’s used in today’s Rivella is more processed than the unfiltered product of the past. However, much like another famous Swiss drink, Ovomaltine, its connection with overall health, outdoor living, and its so-called nutritional advantages are still heavily advertised—and highly dubious. On average, the Swiss drink around 10 litres of Rivella per person, per year. 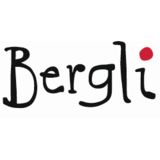 Have a look at the lovely drawings in our book 'Drink like the Swiss' by Andie Pilot.

Have a look at the lovely drawings in our book 'Drink like the Swiss' by Andie Pilot.