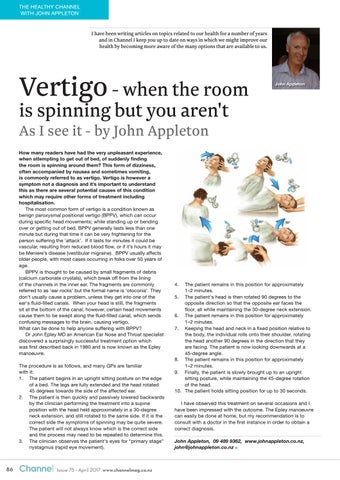 THE HEALTHY CHANNEL WITH JOHN APPLETON

I have been writing articles on topics related to our health for a number of years and in Channel I keep you up to date on ways in which we might improve our health by becoming more aware of the many options that are available to us.

Vertigo - when the room

is spinning but you aren't

As I see it - by John Appleton How many readers have had the very unpleasant experience, when attempting to get out of bed, of suddenly finding the room is spinning around them? This form of dizziness, often accompanied by nausea and sometimes vomiting, is commonly referred to as vertigo. Vertigo is however a symptom not a diagnosis and it’s important to understand this as there are several potential causes of this condition which may require other forms of treatment including hospitalisation. The most common form of vertigo is a condition known as benign paroxysmal positional vertigo (BPPV), which can occur during specific head movements; while standing up or bending over or getting out of bed. BPPV generally lasts less than one minute but during that time it can be very frightening for the person suffering the ‘attack’. If it lasts for minutes it could be vascular, resulting from reduced blood flow, or if it’s hours it may be Meniere’s disease (vestibular migraine). BPPV usually affects older people, with most cases occurring in folks over 50 years of age. BPPV is thought to be caused by small fragments of debris (calcium carbonate crystals), which break off from the lining of the channels in the inner ear. The fragments are commonly referred to as ‘ear rocks’ but the formal name is ‘otoconia’. They don't usually cause a problem, unless they get into one of the ear's fluid-filled canals. When your head is still, the fragments sit at the bottom of the canal, however, certain head movements cause them to be swept along the fluid-filled canal, which sends confusing messages to the brain, causing vertigo. What can be done to help anyone suffering with BPPV? Dr John Epley MD an American Ear Nose and Throat specialist discovered a surprisingly successful treatment option which was first described back in 1980 and is now known as the Epley manoeuvre. The procedure is as follows, and many GPs are familiar with it: 1. The patient begins in an upright sitting posture on the edge of a bed. The legs are fully extended and the head rotated 45 degrees towards the side of the affected ear. 2. The patient is then quickly and passively lowered backwards by the clinician performing the treatment into a supine position with the head held approximately in a 30-degree neck extension, and still rotated to the same side. If it is the correct side the symptoms of spinning may be quite severe. The patient will not always know which is the correct side and the process may need to be repeated to determine this. 3. The clinician observes the patient's eyes for “primary stage” nystagmus (rapid eye movement).

4. The patient remains in this position for approximately 1–2 minutes. 5. The patient's head is then rotated 90 degrees to the opposite direction so that the opposite ear faces the floor, all while maintaining the 30-degree neck extension. 6. The patient remains in this position for approximately 1–2 minutes. 7. Keeping the head and neck in a fixed position relative to the body, the individual rolls onto their shoulder, rotating the head another 90 degrees in the direction that they are facing. The patient is now looking downwards at a 45-degree angle. 8. The patient remains in this position for approximately 1–2 minutes. 9. Finally, the patient is slowly brought up to an upright sitting posture, while maintaining the 45-degree rotation of the head. 10. The patient holds sitting position for up to 30 seconds. I have observed this treatment on several occasions and I have been impressed with the outcome. The Epley manoeuvre can easily be done at home, but my recommendation is to consult with a doctor in the first instance in order to obtain a correct diagnosis. John Appleton, 09 489 9362, www.johnappleton.co.nz, john@johnappleton.co.nz 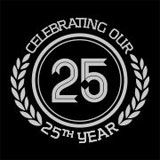