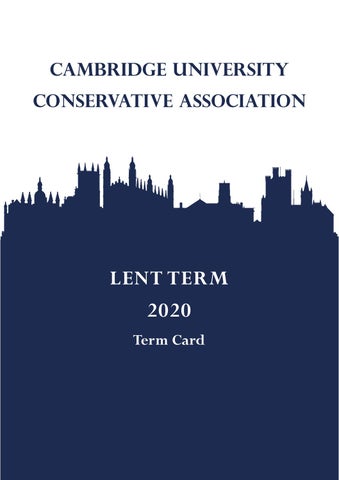 A new committee is elected every term, with nominations opening at the end of this term. Co-option is a great way to get involved in the running of the association with the elected members of committee. Nominations to be co-opted will close at the end of the first week of term. If you are interested, please do not hesitate to get in touch with a member of the committee.

CHAIRMAN’S FOREWORD Dear Member, It gives me great pleasure to present the Term Card of events for the Cambridge University Conservative Association for Lent Term 2020. It is with confidence that I say that for someone interested in politics, current affairs and free debate about them, there is no better student society to join than CUCA, Cambridge’s oldest and most established Conservative society. Whether it is for the high-profile speakers, campaigning, engaging debate or for great socials - or for all those things together - there is something for everyone. Cambridge is a wonderful place to be in Lent, and we have some fantastic events planned for this term. The highlight of every term is the Chairman’s Dinner which takes place towards the end of each Chairman’s time in charge - details of this will be announced at the beginning of term so keep an eye out for tickets! I’d like to give special thanks to a few people for helping me to put this together. The former Chairman, Harry Clynch, for all his advice, the Junior Treasurer, Tohin Munshi, for his voice of reason, and the Social Events and Speakers Officers, Roberto Salvia and Zachary Marsh, without whom none of these events could happen. I very much hope to see you at one of our events this term. Kind Regards,

SOCIALS Independence Day Party We will be joining the local Cambridge Brexit activists to mark this momentous occasion. Whether you supported leave or reamain all are invited to come along and celebrate our great country. Friday 31st January The Cambridge Brew House

Pub Crawl Join Cambridgeâ&#x20AC;&#x2122;s most fun political society as we tour the finest establishments Cambridge has to offer including Tim Martinâ&#x20AC;&#x2122;s J D Wetherspoons. As ever, all are welcome. Saturday 8th February Route TBC

Chocolate and Cava Members are cordially invited to attend our traditional Chocolate and Cava reception. It offers a perfect opportunity to meet new people and catch up with old friends, over a glass of cava and a fine selection of chocolates. Come along for the glorious combination of alcohol and chocolate! Tuesday 18th February

Chairman’s Dinner The highlight of any CUCA Term is the Chairman’s Dinner. This term the dinner will be held in the SCR of Selwyn College, Cambridge. Dinner will be preceded by a sparkling wine reception and we will be joined by a well known conservative speaker. Date TBC

SPEAKERS Lord Lilley Peter Lilley is a former Conservative MP and has held a variety of ministerial and shadow ministerial roles. He served in the Cabinet between 1990 and 1997 and as Shadow Chancellor and Deputy Leader of the Conservative Party in the late 1990’s. He sat on the Exiting the European Union Select Committee between 2016 and 2017 and became a member of the House of Lords in June 2018. Tuesday 28th January

Former Downing Street Chief of Staff Gavin Barwell was the MP for Croydon Central from 2010-2017 and is the author of a book about his expeience of holding his seat in the 2015 General Election by just 165 votes. He was Chief of Staff to the Prime Minister from 2017-2019 during one of the most turbulent periods in British political history. Friday 7th February

Leader of the House of Commons

Jacob Rees-Mogg is undoubteldy one of the most prominent figures in contemporary British politics. An arch-Brexiteer, he has long been a vocal critic of the UK’s membership of the European Union and was a thorn in the side of those who sought to dilute Brexit. With the end of the first phase of Brexit having come to and, there will be plenty to talk about with this key member of Boris Johnson’s administration. Thursday 13th February

Historian and CUCA President Our esteemed President Andrew Roberts is one of the greatest historians of our time; the Sunday Times called his recent biography of Winston Churchill â&#x20AC;&#x2DC;the best single-volume life of Churchill ever written.â&#x20AC;&#x2122; We look forward to welcoming you to what will undoubtedly be a thoroughly enjoyable evening. Thursday 20th February

Secretary of State for Education

Mr Williamson has risen quickly through the Conservative Party ranks, and as Chief Whip, was central to the negotiations with the DUP after the 2017 General Election before serving as Secretary of State for Education. Having returned to the government after being sacked by Theresa May, this will no doubt be a fascinating evening. Friday 28th February

Author and Journalist Douglas Murray is Associate Editor of The Spectator. He is a leading author and journalist on multiculturalism and free speech, as well as the author of The Madness of Crowds and The Strange Death of Europe: Immigration, Identity, Islam. He will be addressing us on how we can resist the woke culture that plagues our university. Thursday 5th March

CAMPAIGNING ‘Campaigns’ at CUCA covers a range of different roles; it isn’t just regimented leafleting. We reach out to the wider Conservative network, liaise with other political societies in Cambridge, and spread the true blue message to the student community. Campaigning usually takes place at the weekend - if you are interested and would like to learn more or get involved please email the Campaigns Officer, William Rowland at wejr2@cam.ac.uk. The local government elections in May will be ‘all out’ elections in which all of the seats will be up for election. If you are interested in standing as a candidate for the Conservative Party please get in touch with Benedict at bws26@cam.ac.uk for more information.

AWAY DAYS Our away days often feature appearances from the politicians for whcih we are campaigning. They are great opportunities to meet like-minded people. We look forward to seeing you out on the campaign trail! Join us for one of our regular campaign days in and around Cambridge with Lucy Frazer MP. Lucy has been the Conservative Member of Parliament for South East Cambridgeshire This is a fantastic oppotunity to network with a local MP and help the Conservative Paty ahead of the local elections this May! Saturday 14th March Look out for more away days in places across the country. We will be advertising them on our Facebook page and by email when they are organised. They are always an excellent day out and is one way to really get involved with the party.

THE CUCA TIE The Association is delighted to announce that we have commissioned Ryder and Amies to produce the original tie design. The tie is grey with a narrow cerise stripe. Ties may be purchased for ÂŁ35 via Bank Transfer: Sort Code: 40-16-08 Account Number: 92881578 Once you have paid please fill in the Google Form on the CUCA website - cuca.org.uk/shop. The Secretary, Tim Butterfield, will contact you regarding the delivery.

THE CUCA BLOG We all know that Varsity will refuse to publish any views which are to the right of Stalin, so fortunately we at CUCA have set up our much better written and more interesting blog to rectify this. All views are welcome; if you have an article on current affairs that you would like to submit, send it over to the Communications and Publicity Officer, Isaac Lamb at ibhl2@cam.ac.uk.

THE CONINGSBY CLUB We would like to thank the Coningsby Club for sponsoring the publication of the Lent Term Card. The Coningsby Club is a dining club founded in 1921 to help keep Conservatively-minded students from Oxford and Cambridge, including alumni of OUCA and CUCA, in touch with each other and intellectually with the Conservative cause. The Club hosts regular dinners with prominent (often Cabinet level) figures from politics, academia, the Church, journalism, and the arts, as well as hosting other social events throughout the year. Many nationally known Oxford and Cambridge Conservative politicians went on to the Coningsby Club after CUCA or OUCA so you will be in good company. Membership is by invitation only and requires an application supported by existing members to be approved by the Club. 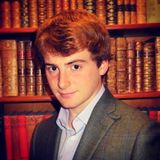