Junior High School Canisius College, Central Jakarta Canisian Award- Class of 2010 For the outstanding performance in developing full potentials in area: academic, spiritual, leadership, concern to others, and openness to grow. Striving to live out the ideals of Canisius College of being a “Man for and with others”.

Senior High School Canisius College, Central Jakarta St. Peter Canisius Award- Class of 2013 For the dedication and the best effort throughout the study to be a true Canisian, who is consistantly showing an example of person of competence, conscientiousness, and compassionate leader.

In an interdiciplinary team, developed the concept of ‘The Passage - Intercity Express City West’ to overcome the phenomena of abandoned and isolated strategical-historical-space in Erfurt city.

I believe that the built environment exists from, for, and because of the harmony among humans and the nature

‘ITB-Jatinangor Campus Center’ is a facility designed for the students and the staffs to interact and socialize with each other. The students use this facility to develop themselves outside the curricular activities. Those activities can be categorized as an extracurricular activity such as ‘Meet, Plat, Eat, Study’. The approach used in the design is the composition form approach, without set asides the functions and the contexts of the existing environment.

In this architecture design studio, designed an Urban Infill building that can support 24-hour activities on Braga Street. Urban infill is an effort to increase the land value in urban areas by increasing the building area to its maximum as permitted. It serves as an answer to the increasing need of space that isn’t balanced with the land availability. Braga Street itself was once a Bandung center, but now its existence is diminishing and can’t compete with the other Bandung’s activity centers . However, with most of its colonial buildings are still intact, Braga Street still has the potential as an image of the old Bandung.

In this architecture design studio, designed a mixed-use building: between high density residential and commercials functions in the downtown, with regard to the pedestrians’ permeability. Permeability is generally considered a positive attribute of an urban design, as it permits ease of movement and avoids severing neighborhoods. The quality of permeability plays a major role to the city’s efficiency, city’s social integration, and city’s economy. Mixture buildings provide the opportunity to create a city with permeability, especially for the pedestrians that are needed to the downtown’s movement.

In this architecture design studio, designed a Walk-up Apartment in Cicadas, Bandung City, with 5 floors height. This Walk-up Apartment serves as a medium-high density residential as a solution to some urban issues. These urban issues include: the increasing number of the density of population, the lack of decent housing for low-income people, and the sprawlingâ&#x20AC;&#x2122;s phenomenon.

â&#x20AC;&#x153;Beehive Lanternâ&#x20AC;? is a parametric designed model that takes a ball form with hexagonal pattern on its surface. Hexagon shape has an even number of sides so it can make an interesting three-dimensional form. Parameters that used in this model consists of: hexagons amount, hexagons offset, amplitude offset, and the location of the attractor point. This attractor point is placed at the top of the ball, so the more distance between the attractor point with the ball, then the more size of hexagons and its offset distance will generated.

Bamboo Buildings Prototype for Fishermenâ&#x20AC;&#x2122;s Houses and Settlements Case Study: Tegur Village, Indramayu, West Java Weaving the Community with Friendly Construction Indonesia as a large maritime country with a vast ocean area has not been able to meet the needs of habitable houses and settlements for the fishermen. This is contrary to the realization that the fisherman is the front guard of various potentials of Indonesia sea. It is assumed that the government plans on developing and building bamboo buildings prototype those are eco-friendly and affordable for the fishermen. This project is a fictitious project with bamboo buildings designed to consist of modules of growing houses and settlements, public facilities such as production buildings and MCK buildings. 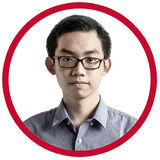