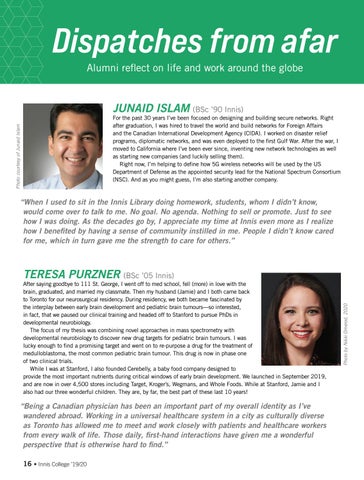 For the past 30 years I’ve been focused on designing and building secure networks. Right after graduation, I was hired to travel the world and build networks for Foreign Affairs and the Canadian International Development Agency (CIDA). I worked on disaster relief programs, diplomatic networks, and was even deployed to the first Gulf War. After the war, I moved to California where I’ve been ever since, inventing new network technologies as well as starting new companies (and luckily selling them). Right now, I’m helping to define how 5G wireless networks will be used by the US Department of Defense as the appointed security lead for the National Spectrum Consortium (NSC). And as you might guess, I’m also starting another company.

“When I used to sit in the Innis Library doing homework, students, whom I didn’t know, would come over to talk to me. No goal. No agenda. Nothing to sell or promote. Just to see how I was doing. As the decades go by, I appreciate my time at Innis even more as I realize how I benefited by having a sense of community instilled in me. People I didn’t know cared for me, which in turn gave me the strength to care for others.”

After saying goodbye to 111 St. George, I went off to med school, fell (more) in love with the brain, graduated, and married my classmate. Then my husband (Jamie) and I both came back to Toronto for our neurosurgical residency. During residency, we both became fascinated by the interplay between early brain development and pediatric brain tumours—so interested, in fact, that we paused our clinical training and headed off to Stanford to pursue PhDs in developmental neurobiology. The focus of my thesis was combining novel approaches in mass spectrometry with developmental neurobiology to discover new drug targets for pediatric brain tumours. I was lucky enough to find a promising target and went on to re-purpose a drug for the treatment of medulloblastoma, the most common pediatric brain tumour. This drug is now in phase one of two clinical trials. While I was at Stanford, I also founded Cerebelly, a baby food company designed to provide the most important nutrients during critical windows of early brain development. We launched in September 2019, and are now in over 4,500 stores including Target, Kroger’s, Wegmans, and Whole Foods. While at Stanford, Jamie and I also had our three wonderful children. They are, by far, the best part of these last 10 years!

“Being a Canadian physician has been an important part of my overall identity as I’ve wandered abroad. Working in a universal healthcare system in a city as culturally diverse as Toronto has allowed me to meet and work closely with patients and healthcare workers from every walk of life. Those daily, first-hand interactions have given me a wonderful perspective that is otherwise hard to find.” 16 • Innis College ’19/20