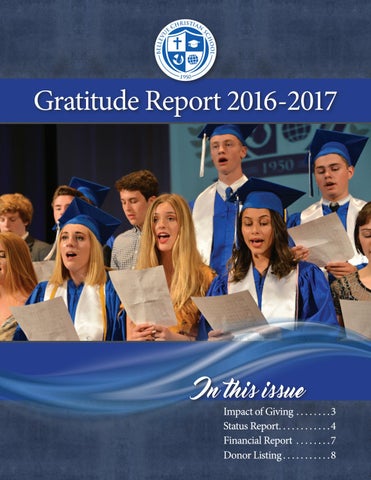 Message from Superintendent “It was a very good year.” While the phrase might be more associated with fine wine or winning a championship, it is an apt description of what occurred over the 2016-17 school year at Bellevue Christian School. Once again, the abundance of God’s blessings was demonstrated in the success of our students, the dedication of our faculty and staff, and the generosity of our benefactors, parents, and alumni. The year proceeded under the theme: “Let us fix our eyes on Jesus,” from Hebrews 12:2. We sought ways to carry that theme beyond the posters that adorned the hallways and instead embed it in the hearts and minds of all those touched by the ministry of BCS. It was a focus in chapel, in communications with our community, and helped to underscore our distinctiveness as a school serving the greater eastside.

The class of 2017 soared. Ninety-eight percent of graduates went on to college. Forty-six percent graduated with GPAs of 3.5 or above. Their leadership sparked nine appearances in state championship athletic competitions as individuals or teams. Most importantly, their commitment to community service was a powerful witness to the power and impact of the Gospel. The faculty embarked on two professional development paths, one leading to more systemic use of technology in the classroom; the other, a return to the very foundation of BCS, Teaching for Transformation. This framework for a biblical transformational worldview brings us back to the deep hope that Al and Joe Greene had for BCS students; that they think and live with the understanding that faith and learning are inseparable as long as it is centered in Jesus Christ. We were blessed to have a good year financially, thanks to some enrollment growth, careful stewardship of our funds, and record-breaking support from friends and family in the BCS Community. As we look to address some critical facility needs in the near term, the blessings of many years of carefully resourced stewardship will make the task of funding the significant cost of renovation a little less daunting. On a personal note, I want to thank the BCS community for welcoming me into the family. I follow a long line of dedicated superintendents who have shepherded this ministry for more than six decades. Your prayers and support have made my transition smoother than I could have hoped. My collaboration with a supportive and effective board of directors gives me confidence that our best days lie ahead of us. 2017 was a very good year for BCS. To God alone be glory! In His Service,

Impact of Giving This past June, I traveled to Thailand and Myanmar through the BCS Mission Experience. Before this trip, I had never been on a mission trip and I was forced out of my happy bubble of comfort and pushed into the grimy, fast-paced, and chaotic lifestyle of experiencing a new culture. Although I was uncomfortable, my life would be forever changed by the people, culture, and God-moments I experienced on that trip. Even before we got there, our team leaders always said that we needed to “see” instead of “look”. Although at first this seemed counterintuitive to me, I believe that “seeing” the people was the most valuable thing I did on the trip. I got to see more than just the surface of a pretty city or a chaotic market. I got to see the interactions, experience the culture, and watch God work. My experience was incredible because of the insight I gained just by “seeing”. Before this trip I thought that mission work was to change and transform people’s lives with the gospel. Now, I know it is much more than that. I now know God is working in Thailand and Myanmar, and on my trip I got to see that and begin to understand my place in God’s work. I didn’t need to start the work, I needed to see it. At Rainbow Children’s Home in Myanmar I made an incredible friend named Joy. She was so patient with me, and always generous in connecting with me despite our language barrier. This year, I get to go back and see Joy again. I am so thrilled to see her smiling face. I am a new person because of my trip. We greatly appreciate your prayers and financial support. The fruit from these trips is truly remarkable. -Lucy Smith, ‘19 Melissa Brady, ’17 is a freshman at the University of Washington. Her intended major is business with a focus in entrepreneurship. Her goal is to open a café one day. While at BCS, Melissa participated in volleyball and softball. She also played the flute in the band. Outside of school, Melissa was active as a dancer and participated in dog 4H for 7 years. She volunteered at her church and at a summer camp. Her favorite high school memory was taking a van to Disneyland with the band during her Junior year. Melissa Brady, ‘17

Melissa felt challenged and supported in the classroom. She credits Ms. Joanne Grambush for helping her develop her skills in art. “She challenged me in many ways to make me think outside the box. I especially matured in the content that I was producing by my senior year for my AP Art portfolio.” Melissa worked hard, dedicating time to academics, extracurricular activities and service to others. She received an Undergraduate University Grant to the University of Washington. The grant is a real blessing to Melissa and her family, because, without it, the cost of college would be a real hurdle. While at Bellevue Christian, Melissa was one of many students receiving financial aid. The full price of tuition was beyond her mother’s means, but with the help of Bellevue Christian donations to the Annual Fund, she was awarded enough financial aid to cover a portion of the cost. Melissa benefitted from the generosity of others, and BCS benefitted from the gifts Melissa brought to our community. “I am really thankful that BCS was able to grant me the opportunity to study in safe, friendly environment that gave me a great background of knowledge for my future in college.” -Mellissa Brady, ‘17 Page 3

25% of our students are of Asian, African American, or Latino background

Students are transported to the three campuses from over zip codes, including Snoqualmie, Renton, Seattle and Woodinville.

With YOUR generous donations, Bellevue Christian School was able to... Transportation • Purchase a new pickup truck for Facilities to use between all campuses • Wrap the fleet of vehicles (7 vans and 2 trucks) with new branded graphics

Technology projects: • Upgrade the BCS computers district-wide to Windows 10 • Upgrade the networks, including more wireless access points and speed upgrades at all three campuses • Purchase approximately 230 Surface 3’s and Surface 4’s for junior high and high school science classrooms and laptop carts at the two elementary campuses for student use • Upgrade the computer lab on the Clyde Hill campus • Install new computers and monitors for the computer lab at Three Points Elementary

Learning Initiative • Partnered with the Prairie Centre for Christian Education (PCCE) to implement and adopt Teaching for Transformation (TfT). • Eight faculty members and one administrator participated in intensive training as “Early Adopters.” • They have practiced implementing the three core practices in TfT: Storyline, Throughlines, and Formational Learning Experiences.

Donors THANK YOU to our generous donors for your thoughtful support of Bellevue Christian School. We strive to produce an accurate listing of our donors. We apologize for any discrepancies or omissions. Please report any errors to Theresa Larsen at 425-454-4402 x210. The following list represents tax-deductible giving to the following activities and funds between July 1, 2016 and June 30, 2017: Founders Fund, Viking Classic Golf Tournament, Oh the Places BCS Will Go Community Fundraising Bash, Jog-A-Thon, missions, endowments, and special projects. Christian and Amy Aaselund Gregory and Darla Abbas Rocky Abild Paul and Alicia Adams Tony Adams Daniel and Melanie Adent Jon and Colette Aguirre Michele Ahearn Seth and Jessica Ahnert

BCS students with children on the Thailand mission trip

We strive to produce an accurate listing of our donors. We apologize for any discrepancies or omissions. Please report any errors to Theresa Larsen Institutional Advancement at 425-454-4402 x210.

Register today! Saturday, May 5th 2018 The Signature Event: “What’s Your BCS Story?” 6pm-10pm The event will take place under the BCS roof on the Clyde Hill campus. Alumni, Staff, Parents and Community Members (over 18) are all encouraged to come! 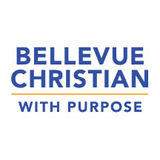