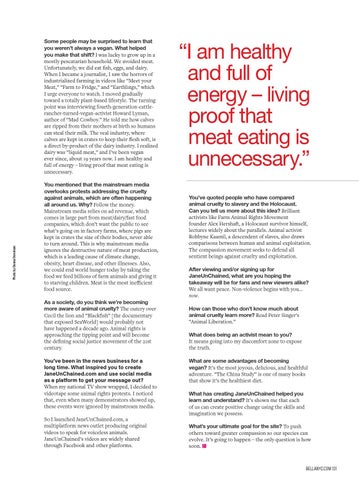 Some people may be surprised to learn that you weren’t always a vegan. What helped you make that shift? I was lucky to grow up in a mostly pescatarian household. We avoided meat. Unfortunately, we did eat fish, eggs, and dairy. When I became a journalist, I saw the horrors of industrialized farming in videos like “Meet your Meat,” “Farm to Fridge,” and “Earthlings,” which I urge everyone to watch. I moved gradually toward a totally plant-based lifestyle. The turning point was interviewing fourth-generation-cattlerancher-turned-vegan-activist Howard Lyman, author of “Mad Cowboy.” He told me how calves are ripped from their mothers at birth so humans can steal their milk. The veal industry, where calves are kept in crates to keep their flesh soft, is a direct by-product of the dairy industry. I realized dairy was “liquid meat,” and I’ve been vegan ever since, about 19 years now. I am healthy and full of energy – living proof that meat eating is unnecessary. You mentioned that the mainstream media overlooks protests addressing the cruelty against animals, which are often happening all around us. Why? Follow the money. Mainstream media relies on ad revenue, which comes in large part from meat/dairy/fast food companies, which don’t want the public to see what’s going on in factory farms, where pigs are kept in crates the size of their bodies, never able to turn around. This is why mainstream media ignores the destructive nature of meat production, which is a leading cause of climate change, obesity, heart disease, and other illnesses. Also, we could end world hunger today by taking the food we feed billions of farm animals and giving it to starving children. Meat is the most ineﬃcient food source. As a society, do you think we’re becoming more aware of animal cruelty? The outcry over Cecil the lion and “Blackfish” [the documentary that exposed SeaWorld] would probably not have happened a decade ago. Animal rights is approaching the tipping point and will become the defining social justice movement of the 21st century. You’ve been in the news business for a long time. What inspired you to create JaneUnChained.com and use social media as a platform to get your message out? When my national TV show wrapped, I decided to videotape some animal rights protests. I noticed that, even when many demonstrators showed up, these events were ignored by mainstream media. So I launched JaneUnChained.com, a multiplatform news outlet producing original videos to speak for voiceless animals. JaneUnChained’s videos are widely shared through Facebook and other platforms.

“I am healthy and full of energy – living proof that meat eating is unnecessary.” You’ve quoted people who have compared animal cruelty to slavery and the Holocaust. Can you tell us more about this idea? Brilliant activists like Farm Animal Rights Movement founder Alex Hershaft, a Holocaust survivor himself, lectures widely about the parallels. Animal activist Robbyne Kaamil, a descendent of slaves, also draws comparisons between human and animal exploitation. The compassion movement seeks to defend all sentient beings against cruelty and exploitation. After viewing and/or signing up for JaneUnChained, what are you hoping the takeaway will be for fans and new viewers alike? We all want peace. Non-violence begins with you… now. How can those who don’t know much about animal cruelty learn more? Read Peter Singer’s “Animal Liberation.” What does being an activist mean to you? It means going into my discomfort zone to expose the truth. What are some advantages of becoming vegan? It’s the most joyous, delicious, and healthful adventure. “The China Study” is one of many books that show it’s the healthiest diet. What has creating JaneUnChained helped you learn and understand? It’s shown me that each of us can create positive change using the skills and imagination we possess. What’s your ultimate goal for the site? To push others toward greater compassion so our species can evolve. It’s going to happen – the only question is how soon. B 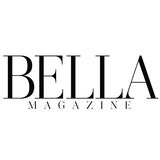