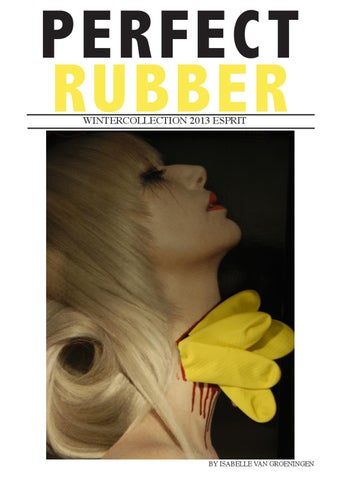 ONCE UPON A TIME RUBBER BEGAN A NEW LIFE .. Before I knew I wanted to use rubber gloves and tires, I did a lot of research. Tried a lot of shapes and materials, but not one gave me a feeling of something innovative. When I was browsing the internet I found two designs that realy cought my eye; one by ..., she made jewellery with bicycle tires and the other design was by Min Ji Cho, she made also jewellery with cleaning gloves. I immidiatly was inspired and made it my mission to make something everybody would love.

HISTORY OF THE RUBBER GLOVE .. Invented by William Stewart Halsted, household rubber gloves have been used for washing dishes and cleaning in the home since the 1960s. Many different designs of gloves have been available in a multitude of colors but traditional designs in yellow or pink with long cuffs. While these still remain the most popular patterns today, gloves can be obtained that range from wrist-length to those that are shoulder-length. There are even gloves that are pre-attached to shirts and bodysuits for added protection. Rubber gloves are best worn with a skin tight fit which, while still allowing for the hands to breathe, makes it easier to hold objects and manipulate them. The palms and fingers usually have a raised pattern which helps provide a good grip when handling objects. Wearing gloves protects the hands from harsh detergents and other cleaning products which are used in the home and elsewhere. They also protect the wearer from bacteria involved in such tasks as the cleaning of toilets and cleaning up after pets. These gloves are traditionally used by people cleaning in the home but are also popular with professional cleaners and for clearing up in shops, cafes and other public places. The thickness of the gloves and the long cuffs provide excellent protection for all general cleaning tasks and are useful for all chores where the hands need to be put into water, but also provide protection when vacuuming, dusting, and polishing. The most common material used for making household gloves is latex, a form of rubber. Usually, the gloves have a cotton â&amp;#x20AC;&amp;#x153;flockâ&amp;#x20AC;? lining for easily taking them on and off. However, unlined gloves feel better on the skin and provide a greater ability to manipulate things. They are also available in a wider range of colors and cuff lengths. Problems with latex rubber include allergic reactions and poor protection against such substances as solvents. Other materials used to alleviate this are PVC, nitrile, and neoprene. Natural rubber that has been chemically treated to reduce the amount of antibody generators, such as Vytex Natural Rubber Latex, can be used to produce a glove that retains the properties of traditional rubber while exposing the user to significantly reduced amounts of latex allergens.

HISTORY OF THE BICYCLE TIRES .. The first bicycle “tires” were iron bands on the wooden wheels of velocipedes. These were followed by solid rubber tires on penny-farthings. In an attempt to soften the ride, rubber tires with a hollow core were also tried. The first practical pneumatic tire was made by John Boyd Dunlop, a Scot, in 1887 for his son’s bicycle, in an effort to prevent the headaches his son had while riding on rough roads (Dunlop’s patent was later declared invalid because of prior art by fellow Scot Robert William Thomson). Dunlop is credited with “realizing rubber could withstand the wear and tear of being a tire while retaining its resilience”. This led to the founding of Dunlop Pneumatic Tyre Co. Ltd in 1889. By 1890, it began adding a tough canvas layer to the rubber to reduce punctures. Racers quickly adopted the pneumatic tire for the increase in speed it enabled. Finally, the detachable tire was introduced in 1891 by Édouard Michelin. It was held on the rim with clamps, instead of glue, and could be removed to replace or patch the separate inner tube.

JEWELLERY MADE OUT OF CLEANING GLOVES Made by Min Ji Cho

JEWELLERY MADE OUT OF BICYCLE TIRES Made by MY SISTERS ART

ONCE UPON A TIME THERE WAS.. A RUBBER GLOVE THAT WANTED TO START A NEW LIFE.. INSTEAD OF BEING USED FOR THE DIRTY WORK.. HE WANTED A NEW MEANING IN LIFE..