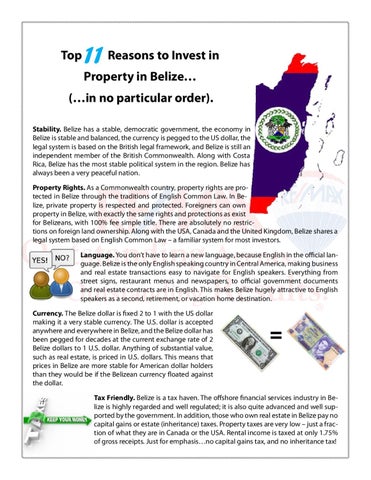 11 Reasons to Invest in

(…in no particular order). Stability. Belize has a stable, democratic government, the economy in Belize is stable and balanced, the currency is pegged to the US dollar, the legal system is based on the British legal framework, and Belize is still an independent member of the British Commonwealth. Along with Costa Rica, Belize has the most stable political system in the region. Belize has always been a very peaceful nation. Property Rights. As a Commonwealth country, property rights are protected in Belize through the traditions of English Common Law. In Belize, private property is respected and protected. Foreigners can own property in Belize, with exactly the same rights and protections as exist for Belizeans, with 100% fee simple title. There are absolutely no restrictions on foreign land ownership. Along with the USA, Canada and the United Kingdom, Belize shares a legal system based on English Common Law – a familiar system for most investors. Language. You don’t have to learn a new language, because English in the official language. Belize is the only English speaking country in Central America, making business and real estate transactions easy to navigate for English speakers. Everything from street signs, restaurant menus and newspapers, to official government documents and real estate contracts are in English. This makes Belize hugely attractive to English speakers as a second, retirement, or vacation home destination. Currency. The Belize dollar is fixed 2 to 1 with the US dollar making it a very stable currency. The U.S. dollar is accepted anywhere and everywhere in Belize, and the Belize dollar has been pegged for decades at the current exchange rate of 2 Belize dollars to 1 U.S. dollar. Anything of substantial value, such as real estate, is priced in U.S. dollars. This means that prices in Belize are more stable for American dollar holders than they would be if the Belizean currency floated against the dollar. Tax Friendly. Belize is a tax haven. The offshore financial services industry in Belize is highly regarded and well regulated; it is also quite advanced and well supported by the government. In addition, those who own real estate in Belize pay no capital gains or estate (inheritance) taxes. Property taxes are very low – just a fraction of what they are in Canada or the USA. Rental income is taxed at only 1.75% of gross receipts. Just for emphasis…no capital gains tax, and no inheritance tax!

Location. Belize is highly accessible from the US and Canada, and now from western Europe as well. Its proximity to Canada and the US creates short travel time and there is no jet lag due to time differences. (Belize is on Central Time.) Direct flights to Belize depart from Miami, Atlanta, Charlotte, Newark, Dallas, Houston, Los Angeles, and Toronto (seasonal). With the expansion of the runway completed at Belize International Airport, long-haul direct flights from Canada and Europe are expected to begin service in the very near future. International arrivals to Belize have been increasing drastically in the last 6 years – at an annualized growth rate of 11.1% (which is the highest in Central America). Natural Beauty & Eco-Tourism. Belize has the 2nd largest and most fascinating and beautiful barrier reef in the world. The diving and snorkeling are consistently rated among the very best in the world. Over 46% of Belize is dedicated to National Parks and Marine Reserve, including United Nations World Heritage sites such as the 27,000 acre Balcalar Chico National Park and Marine Reserve on Ambergris Caye. Belize is home to thousands of species of trees and flowers, hundreds of kinds of birds and butterflies. It has reefs and tropical rainforests, beaches and mountains, over 600 sites of Mayan ruins, and many rivers teeming with wild and rare flora and fauna. From diving to fishing, cave tubing to zip-lining, snorkeling to sailing, and exploring Mayan ruins, Belize is an ecologically diverse, unspoiled paradise. Also, Belize is one of the least densely populated countries in the western hemisphere. Excellent Retiree Program. The Belize Residency Program enables foreigners to retire to Belize under a very favorable set of guidelines, with status as a Qualified Retired Person. This simple process exempts people from the payment of all taxes and levies on all income or receipts which accrue from a source outside of Belize (whether income is from work performed or an investment). This program also provides a duty & tax exemption on new and used personal and household effects (inc. motor vehicles, boats and aircraft). You must be over 45 to qualify, and be able to substantiate monthly income of at least $2,000 (USD). Friendly People. Belize is home to the most genuinely and sincerely friendly people to be found anywhere in the world. You will hear this time and again from everyone who visits to Belize, and for good reason. While Belize is often referred to as “Mother Nature’s Secret”, and most people think that Belize’s natural resources are its greatest asset, the Belizean people are in truth the greatest asset Belize has to offer.

Tropical Climate. The climate ranges from sub-tropical to tropical all year long, similar to that of South Florida. As long as you’re comfortable with warm to hot temperatures, perhaps tempered by cooling breezes from the sea, you’ll like Belize weather. As a bonus, if you are on the Cayes, you’ll enjoy those cooling breezes even more so, and will find that the temperatures are cooler than on the mainland and the humidity less of a factor. Speaking of the Cayes….the #1 reason to invest in Belize Ambergris Caye. Tourism is Belize’s number one industry, and Ambergris Caye is Belize’s number one tourist destination. It is also the #1 retirement destination in Belize. It is easy to see why. The barrier reef runs parallel to the island of Ambergris Caye, sitting only a half mile (800m) east of San Pedro Town. Ambergris Caye offers miles and miles of white sandy beaches, unforgettable views of the second largest Barrier Reef in the world and some of the best fly and deep water fishing in the Caribbean. Ambergris Caye is best known for being one of the top ten diving destinations in the world, featuring tours to numerous Barrier Reef dive sites as well as the world renowned “Blue Hole”. Ambergris Caye enjoys the highest hotel and condo occupancy rates in the country as well as the highest nightly room rates. Equally important, Ambergris Caye continues to sustain the highest appreciation rates on property anywhere in the country for more than 20 years now, showing that the market is stable and based on ever-increasing demand. Ambergris Caye will remain the top tourist and retirement destination in Belize for exactly the same reasons it got there in the first place. The Belize Tourist Board, a department of the Ministry of Tourism, is aggressively marketing and promoting Belize to the North American and European markets now that the airport can accommodate long-haul direct flights. While annualized growth at 11.1% (over the last 6 years) is the highest in Central America, overnight visitors to Ambergris Caye totaled 200,000 visitors. In comparison, that is the number of visitors to Cancun in any single month of the year!

For lots more info and to learn about investment opportunities in Belize, contact: 11 Reasons to Invest in Belize

11 reaons you should deifnately consider fast-growing Belize as your investment destination!

11 Reasons to Invest in Belize

11 reaons you should deifnately consider fast-growing Belize as your investment destination!