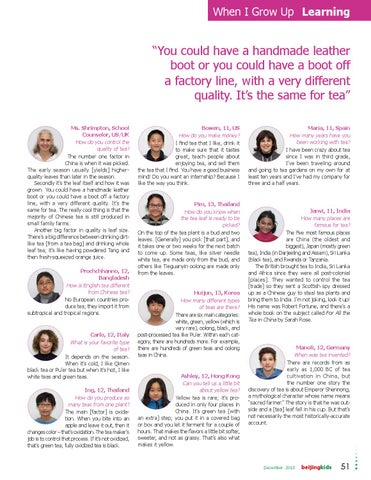 When I Grow Up Learning

Carlo, 12, Italy What is your favorite type of tea? It depends on the season. When it’s cold, I like Qimen black tea or Pu’er tea but when it’s hot, I like white teas and green teas. Ing, 12, Thailand How do you produce so many teas from one plant? The main [factor] is oxidation. When you bite into an apple and leave it out, then it changes color – that’s oxidation. The tea maker’s job is to control that process. If it’s not oxidized, that’s green tea; fully oxidized tea is black.

Bowen, 11, US How do you make money? I find tea that I like, drink it to make sure that it tastes great, teach people about enjoying tea, and sell them the tea that I find. You have a good business mind! Do you want an internship? Because I like the way you think.

Pim, 13, Thailand How do you know when the tea leaf is ready to be picked? On the top of the tea plant is a bud and two leaves. [Generally] you pick [that part], and it takes one or two weeks for the next batch to come up. Some teas, like silver needle white tea, are made only from the bud, and others like Tieguanyin oolong are made only from the leaves.

Huijun, 13, Korea How many different types of teas are there? There are six main categories: white, green, yellow (which is very rare), oolong, black, and post-processed tea like Pu’er. Within each category, there are hundreds more. For example, there are hundreds of green teas and oolong teas in China.

Ashley, 12, Hong Kong Can you tell us a little bit about yellow tea? Yellow tea is rare; it’s produced in only four places in China. It’s green tea [with an extra] step; you put it in a covered bag or box and you let it ferment for a couple of hours. That makes the flavors a little bit softer, sweeter, and not as grassy. That’s also what makes it yellow.

Maria, 11, Spain How many years have you been working with tea? I have been crazy about tea since I was in third grade, I’ve been traveling around and going to tea gardens on my own for at least ten years and I’ve had my company for three and a half years.

Janvi, 11, India How many places are famous for tea? The five most famous places are China (the oldest and biggest), Japan (mostly green tea), India (in Darjeeling and Assam), Sri Lanka (black tea), and Rwanda or Tanzania. The British brought tea to India, Sri Lanka and Africa since they were all post-colonial [places]. They wanted to control the tea [trade] so they sent a Scottish spy dressed up as a Chinese guy to steal tea plants and bring them to India. I’m not joking, look it up! His name was Robert Fortune, and there’s a whole book on the subject called For All the Tea in China by Sarah Rose.

Manoli, 12, Germany When was tea invented? There are records from as early as 1,000 BC of tea cultivation in China, but the number one story the discovery of tea is about Emperor Shennong, a mythological character whose name means “sacred farmer.” The story is that he was outside and a [tea] leaf fell in his cup. But that’s not necessarily the most historically-accurate account. 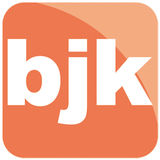 Celebrating Christmas in the capital

Celebrating Christmas in the capital