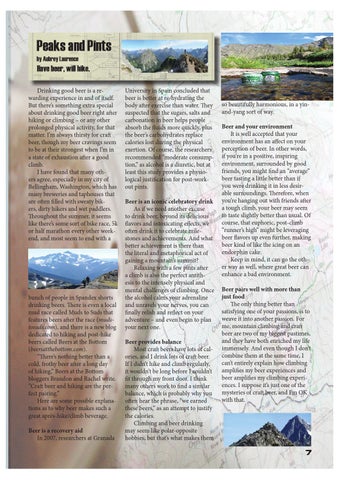 Peaks and Pints by Aubrey Laurence

Have beer, will hike. Drinking good beer is a rewarding experience in and of itself. But there’s something extra special about drinking good beer right after hiking or climbing – or any other prolonged physical activity, for that matter. I’m always thirsty for craft beer, though my beer cravings seem to be at their strongest when I’m in a state of exhaustion after a good climb. I have found that many others agree, especially in my city of Bellingham, Washington, which has many breweries and taphouses that are often filled with sweaty bikers, dirty hikers and wet paddlers. Throughout the summer, it seems like there’s some sort of bike race, 5k or half marathon every other weekend, and most seem to end with a

bunch of people in Spandex shorts drinking beers. There is even a local mud race called Muds to Suds that features beers after the race (mudstosuds.com), and there is a new blog dedicated to hiking and post-hike beers called Beers at the Bottom (beersatthebottom.com). “There’s nothing better than a cold, frothy beer after a long day of hiking,” Beers at the Bottom bloggers Brandon and Rachel write. “Craft beer and hiking are the perfect pairing.” Here are some possible explanations as to why beer makes such a great après-hike/climb beverage. Beer is a recovery aid In 2007, researchers at Granada

University in Spain concluded that beer is better at re-hydrating the body after exercise than water. They suspected that the sugars, salts and carbonation in beer helps people absorb the fluids more quickly, plus the beer’s carbohydrates replace calories lost during the physical exertion. Of course, the researchers recommended “moderate consumption,” as alcohol is a diuretic, but at least this study provides a physiological justification for post-workout pints. Beer is an iconic celebratory drink As if we need another excuse to drink beer, beyond its delicious flavors and intoxicating effects, we often drink it to celebrate milestones and achievements. And what better achievement is there than the literal and metaphorical act of gaining a mountain’s summit? Relaxing with a few pints after a climb is also the perfect antithesis to the intensely physical and mental challenges of climbing. Once the alcohol calms your adrenaline and unravels your nerves, you can finally relish and reflect on your adventure – and even begin to plan your next one. Beer provides balance Most craft beers have lots of calories, and I drink lots of craft beer. If I didn’t hike and climb regularly, it wouldn’t be long before I couldn’t fit through my front door. I think many others work to find a similar balance, which is probably why you often hear the phrase, “we earned these beers,” as an attempt to justify the calories. Climbing and beer drinking may seem like polar-opposite hobbies, but that’s what makes them

so beautifully harmonious, in a yinand-yang sort of way. Beer and your environment It is well accepted that your environment has an affect on your perception of beer. In other words, if you’re in a positive, inspiring environment, surrounded by good friends, you might find an “average” beer tasting a little better than if you were drinking it in less desirable surroundings. Therefore, when you’re hanging out with friends after a tough climb, your beer may seem to taste slightly better than usual. Of course, that euphoric, post-climb “runner’s high” might be leveraging beer flavors up even further, making beer kind of like the icing on an endorphin cake. Keep in mind, it can go the other way as well, where great beer can enhance a bad environment. Beer pairs well with more than just food The only thing better than satisfying one of your passions, is to weave it into another passion. For me, mountain climbing and craft beer are two of my biggest pastimes, and they have both enriched my life immensely. And even though I don’t combine them at the same time, I can’t entirely explain how climbing amplifies my beer experiences and beer amplifies my climbing experiences. I suppose it’s just one of the mysteries of craft beer, and I’m OK with that. Issue 2 of Beer Zen features information on the history of brewing in Portland, Oregon, details on craft beer and glassware, information abo...

Issue 2 of Beer Zen features information on the history of brewing in Portland, Oregon, details on craft beer and glassware, information abo...