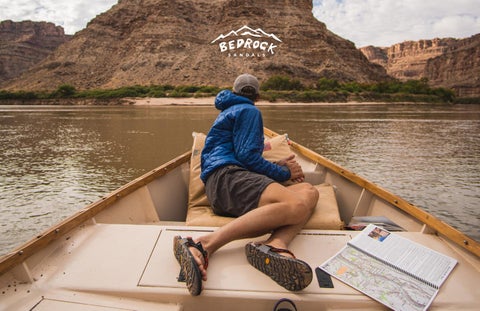 Our first sandal, made with just a sheet of Vibram® rubber, a box cutter, webbing, and a buckle, wasn’t exactly adventure-grade. It was an idea, born in the woods and rivers of Northern California, to make more functional, lighter-weight footwear for outdoor-use. But that initial spark transitioned two fresh-out-of college geologists into sandal-obsessed designers who would go on to create the most durable and capable adventure-footwear on the market.

The launch of our Cairn PRO II line is years in the making. We’d received a few requests from river guides looking for a different heel strap closure that could withstand constant whitewater abuse. But it was a Bedrock customer hiking the 800-mile Hayduke Trail that really put things into motion. All was well with her sandals until she encountered thigh-high quicksand, which gummed up her heel strap and made it really difficult to secure. To help her out in this unforgiving terrain, we crafted a pair with a new heel strap design – one that used our unique G-hook and loop system found on the frontside of our sandals.

The quick-fix worked! And as it goes with river guides and long-distance hikers – who want and need the very best gear – each started asking for this mod to their own pairs. Over the past two seasons, we fixed up a lot of our sandals with these new heel-hook straps and gave them to folks who put them through the wildest conditions. Sacrificing adjustability, durability, or comfort wasn’t an option, we had to have our cake and eat it too. So we prototype-tested the hell out of them on all sorts of feet, making notes and changes along the way until we arrived with a version ready for you.

Featuring our patent-pending Y strap, new heel-hook strap, sole hugger wings, and Vibram® Megagrip outsole, the Cairn PRO II is your do-anything adventure sandal – hard-tested over thousands of river and trail miles, they’re ready to handle whatever you can, from raging rapids to mythical mud pits.

“Whisper nice things to the boat,” Gabe said. I did, because there’s not much else to do as emotional support passenger, and because my desire to swim a rapid was as limited as Gabe’s desire to wreck his dory on its first multi-day trip. But crash and swim we did, as one can expect when rafting Cataract Canyon at low water in a tippy wooden boat. I remember the nauseating crunch of wood on rock and a quick shot of Gabe’s head disappearing into water though I don’t recall falling in myself. I should have been prepared to be tossed into rapids - I’ve jumped into waves with a surfboard and flip my packraft every time I take it out but the cool October morning didn’t make for an ideal ride.

We waded in the soft sand and climbed over rocks for several hours as we righted and unloaded the dory, and I accounted for the lost items - our hats, the coffee pot I’d used to bail water out of the boat after the bilge pump broke, most of the food - while Gabe began repairs. I salvaged silty Oreos while considering the color of my toes but never thought about my footwear itself, the sign of a good shoe. It wasn’t my first experience with Bedrock’s new heel-hook strap sandals, though; Matt and Dan sent early prototypes to me when the Hayduke Trail’s relentless shit bogs proved too much for velcro. The original Cairns have been perfect for summers of granite and clear water in the Tetons but only the hardiest of gear can withstand the gritty, salty hell of Wyoming’s vermillion neighbor.

Utah is the dream state of every outdoorsmen, as indicated by the climbers crowding Wall Street and cars stacked with mountain bikes along River Road. I’ve gravitated to the master of none route, diving into every endeavor with the gear and skills to be considered competently mediocre. But collecting hobbies is a time-consuming and expensive pursuit, and the ones most committed to the dirtbag lifestyle are often those who can least afford it, at least within the confines of the privileged outdoor community. I can barter Debs and Nuun on trail but somehow I don’t think Armada is going to accept that currency.

Which is why we rode gravel bikes rather than mountain bikes on Canyonland’s White Rim Trail. Andrew and Josh managed to crank up sharp hills with occasional success while I gave up on my minimalist 1x drivetrain and pushed my bike up the climbs. My bones shook over sandstone and down steep, sandy descents that challenged my thin tires and brakes. Each instance of hike-a-biking rubbed velcro corrupting dust into Andrew’s sandals, but had no effect on my prototypes. Such underbiking (riding a bike unfit for the particular route) also ate time we did not have in the waning October daylight and we stopped in the dark fifteen miles before our campsite. We still had the enthusiasm to marvel at Joseph Smith’s creations through mouthfuls of cheese and seaweed blunts, and facetiously exclaimed “we live here,” though “here” really means the Cottonwood Heights Walmart parking lot.

My first Bedrocks did not seem ideal either for a cold spring hike from Arches to Zion, where sneaky mud demands sacrificial shoes and cacti reach for hasty toes. Yet in the Hayduke’s 800 or so miles I rarely felt at a disadvantage in my sandals and was impressed by their ability to stick to sandstone walls and wedge into corners of chimneys and chinle. We crossed our doppelgängers in Glen Canyon and raced Stoney Baloney and the Scooby Squad down cliffs and canyons to the Needles Outpost. Ultimately I was the only one of my group to finish the real-life video game though, and I sat among a jarring crowd of hiking boots in Zion with the mixture of misery and relief that comes of seventh dimension fun.

Utah’s backcountry is not the place for ill-preparedness, yet its harshness demands a cavalier attitude. If we didn’t have the requisite wilderness skills and familiarity with this red dirt castle I might worry, but this pairing of competency and absurdity rockets each trip into the furthest unforgettable dimensions. It may be exciting or terrifying or both, but I know I can hike 500 miles on a potato ankle and Gabe can steer his big water boat through 29 of 30 low water rapids.

This attitude is why I continue to wear Bedrocks and pushed for the heel-hook strap on pro models. What planning I put into my trips goes toward permits and survival logistics and sandal-crampon compatibility, and I’ve solidified my gear list so that the staples require no consideration. It’s a relief to know that there’s footwear that can withstand everything I’ve thrown myself into, whether I’m jumping into quicksand or digging the truck out of a snowbank with a broken leg and crutches. When the going gets hard, the hard turn around and order Dominoes, and these sandals have carried me from the Escalante pizza shop to the summit of the highest peak in the Uintas and will continue to do so wherever I feel inclined to go. Danielle Vilaplana, aka. Sonic, is a long distance adventurer and photographer. Find more of her photos and tales on instagram @vilaplanet

We design Bedrocks to the specs we and our core users demand, footwear that will hold up to the abuse of jagged-peak scrambles (the stuff you’re told not to do in sandals) or seasons in and out of renowned whitewater (stuff you’re told to do in sandals, but typically destroys said sandals). Our designs are born on these trails and rivers, jotted down later in a sketchbook, not the other way around. That’s why you won’t find color trend specialists or subscribers to Hot Footwear Industry News here. We love testing our footwear in the real world, collectively logging thousands of miles on backyard trails and faraway adventures. One of the reasons we relocated to Missoula, MT this year was to give us instant access to environments that will further inspire and push our designs forward. Valuable work for us looks like riding bikes over our local peaks, commuting back down the Clark Fork River in a packraft, dreaming up ideas with our team, and cobbling together new versions in the shop. For us, product testing is not a marketing angle or an afterthought applied when the product is already sitting in a distribution center. We don’t send our sandals to ambassadors for unboxing videos and have them “field test” the product just weeks before it’s available to the public, because if there are any faults in the design at that point, it’s far too late to change.

Bedrock proudly takes the long (some call it old school) approach to design and development. We put in the time to innovate and iterate our products until they’re just right. That doesn’t mean things haven’t broken or had to be reworked along the way, it just means we personally wear our designs into the ground for years before handing them over to you. It means over 30 people have strapped on Pro II prototypes for everything from a season of river guiding in the Grand Canyon to thru-hiking the CDT.

Our Cairn PRO II’s, while a straight-forward progression in our PRO line, are a testament to our product design ethos. We listen to our customers’ wishes, make prototypes, adjust measurements, wear-out our own pairs, and send them to friends who put thousands of thru-hike, river canyon, bikepack, and backcountry fishing miles on them – all in pursuit of making the most advanced and rugged adventure sandals we could ever imagine. With that kind of R&D, it’s easy to offer the Cairn PRO II to you, fully-backed by our Rock Solid Warranty and available for Re-Soul when you’ve worn your rubber to the ground.

Thank you all for your valuable feetback, Bedrock stories, and sandal summit selfies. You inspired us to be first to market with a heel-hook strap that allows for the greatest adjustability and whitewater-grade security ever seen on a sandal. For a product this good, it’s always worth the wait. We couldn’t be more excited for you to strap on a pair of Cairn PRO II’s and put them through the ringer! Front & Back Cover and Red Dirt Castle story photography by Danielle Vilaplana. Photography on pages 1-6; 15 by Andrew Bydlon. Photograph on page 17 by Matt McAdow. Many thanks to our defacto group of wear testers for logging the big and dirty miles: West, Howie, Joseph, Lindsay, Cricket, Dagny, Jed, Ian, Neil, Savannah, Danielle, Elliot, Rafiki, Gabe, Dan, Naresh, Wade, Matt, Tony, Cian, Will, Alexa, Cameron, Tiffany, Elise, Jono, Sarah, McNeil, Benedict, Ruthanne, and the Bedrock Team. Meet the PRO II - Your Do-Anything Adventure Sandals. The launch of our Cairn PRO II line is years in the making. We'd received a few reques...

Meet the PRO II - Your Do-Anything Adventure Sandals. The launch of our Cairn PRO II line is years in the making. We'd received a few reques...