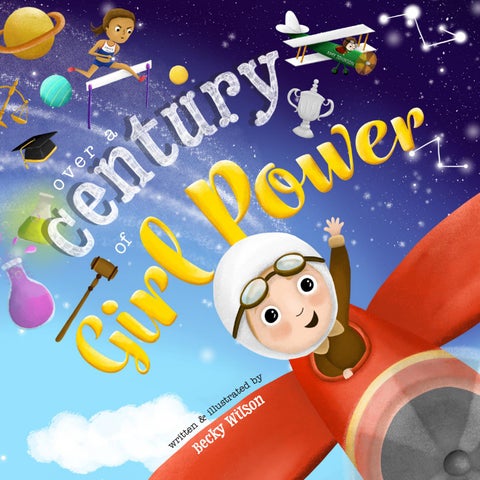 Copyright © 2021 by Becky Wilson All rights reserved. No part of this publication may be reproduced in any form, or by any means, electronic or mechanical, including photocopying, recording, or any information browsing, storage, or retrieval system, without permission in writing from the publisher. Although this publication is designed to provide accurate information in regard to the subject matter covered, the publisher and the author assume no responsibility for errors, inaccuracies, omissions, or any other inconsistencies herein.

Women have achieved amazing things throughout history. Travel through time and meet just a few of these inspiring women and discover their incredible stories.

“W e mu s t b e l i e ve t h at Marie Sklodowska Curie was a scientist from Poland. Her work helped to find treatments for cancer that we still use today.

Marie won the Nobel Prize in 1903 with her husband Pierre. She won again in 1911 and is the only woman ever to win the prize twice!

Marie and Pierre discovered 2 elements called radium and polonium. Everything in the world is made from elements. Finding a new one is really exciting!

Radium is very dangerous, but no one knew that in the 1900s. Marie’s notebooks are still radioactive today and cannot be touched.

we a re gif ted for something” Marie created a portable x-ray machine to help treat injured soldiers. X-ray machines take pictures of the inside of your body. Marie’s daughter and granddaughter also became scientists.

In Britain in the early 1910s, women were still not allowed to vote. A women only group was formed to fight for the right to vote. They were called the Suffragettes.

The name Suffragettes comes from the word Suffrage which means the right to vote.

Emmeline founded the Suffragettes. They were known to break windows and set fires to draw attention to their cause. Many of the women, including Emmeline, spent time in jail for their actions.

KHURST N PA Emmeline’s daughter Sylvia was also a Suffragette. She later left to start her own groups fighting against other issues outside of the right to vote.

In 1918, the vote was given to women over the age of 30 who owned property. In 1928, women won the same voting rights as men. Emmeline died just weeks before the new law passed.

No Vote, No Tax

In 1910, Princess Sophia led a 400 person march to parliament for women’s rights.

She also refused to pay taxes until women got the vote.

In 1926, Gertrude became the first woman to swim the English Channel. Many people thought it was too difficult for a woman but she proved them wrong when she was just 19 years old. Gertrude completed the swim from France to England in 14 hours and 31 minutes. This was 2 hours faster than the men’s record!

100 years ago, women were not allowed to run long distance. But in 1926, Violet Piercy became recognised as the first woman to run a marathon. Violet’s run from Windsor to London was actually slightly less than a marathon, but her story inspired many women and got lots of attention.

Violet finished her run in 3 hours and 40 minutes. The unofficial record stood for 37 years.

Amy Johnson was the first woman to fly solo from England to Australia. She completed the journey in 1930, flying over places that were not even on the map yet (which was very dangerous)! Unlike today, when Amy flew, she had only very basic maps and no radio contact with anyone on the ground. Amy also went missing whilst flying and was never found.

During World War 2, the British government was working on a top secret mission… cracking a German code called Enigma. To do this, they needed the best mathematicians in the country.

This mac hin called a B e, ombe, wa s designed to speed up codebreaking .

In the 1950s, in many countries, black people still didn’t have equal rights and they were treated very badly. Buses were segregated, so black people were only allowed to sit at the back.

Rosa’s arrest happened in Montgomery, USA. After that, many black people refused to use the buses for over a year. This was called the bus boycott. In 1956, the law changed to allow everyone to sit anywhere on the bus.

9 months before Rosa, 15 year old Claudette Colvin was arrested on her way home from school for not giving up her seat to a white person.

MARGARET HAMILTON NASA Software Engineer Margaret led one of the teams that helped design Apollo 11 (the rocket that landed on the moon)!

KATHERINE JOHNSON NASA Mathematician (nicknamed the human computers) Katherine worked on many NASA missions, including Apollo 11. She had to overcome prejudice against both women and black people.

More women have been in space since Valentina Tereshkova, but none have walked on the moon… yet. NASA are planning to put a woman on the moon in 2024.

Billie Jean King is an American tennis legend. During her career she won 39 major tennis tournaments.

The National Tennis Stadium in New York is named after her.

She also campaigned for women to win equal prize money to men. In 2009 she was awarded the Presidential Medal of Freedom for her work fighting for equality. In 1973, retired tennis player Bobby Riggs challenged Billie Jean to a man against woman tennis match. It was called the ‘Battle of the Sexes’ and Billie Jean won. This is the most watched tennis match in history with roughly 90 million people tuning in!

The 1980s was an important decade for women in art. A group of female artists formed the ‘Guerrilla Girls’ to protest against sexism and racism in the art world.

GEORGIA O’KEEFE America, 1887-1986 Georgia was known for painting close up flowers. With the help of assistants, she continued to create art in her 90s even when she was almost completely blind. The Guerrilla Girls hide their identities with gorilla masks!

Yayoi is best known for her sculptures and installations.

Judy is known for installations that often explore women’s roles in history.

Clementine never learnt to read or write, but she taught herself to paint. Her paintings showed her life working on a cotton field.

Ruth Bader Ginsburg was a lawyer and judge who fought for equal rights. She went to law school with her husband. When he became very ill, she went to his classes as well as her own.

Ruth graduated top of her class but it was difficult for her to get a job because she was a woman. When she did get a job she was paid less than the men she worked with.

There were only 9 women in Ruth’s class of 500 st udents.

In 1993, President Bill Clinton chose Ruth to be a Judge in the Supreme Court in America.

Ruth loved d fashion an had lots of e collars lik ar this to we obes. with her r

Professor Wangari Maathai spent her life helping the environment. In 1977 she started the Green Belt Movement which encouraged women to plant trees. In 2004 she became the first African woman to win the Nobel Peace Prize. She was also voted into parliament in her home country, Kenya.

The Green Belt Movement has already planted over 50 million trees in Kenya and it is still going.

HABIBA GHRIBI Olympic Athlete Habiba was the first woman from Tunisia to win an Olympic medal.

competes in 7 events over 2 days.

Hannah has won over 20 gold medals in wheelchair racing.

Whether young or old, you can make a difference in the world Lorna Prendergast Dementia Advocate

After years of fighting for rights and breaking boundaries, in the 2020s, women all over the world are doing amazing things across all fields of work. Once little girls can see it, little girls can be it. Because they can be anything that they want Amanda Gorman Poet & Activist

One child, one teacher, one pen, and one book can change the world Malala Yousafzai Activist

Over a century of Girl Power will take you on a journey to meet just a handful of women who have helped shape the world we live in today. Learn their stories through fascinating facts and beautiful illustrations, and discover how you can follow in the footsteps of these inspiring women and continue the journey into the future... Over a Century of Girl Power

Over a Century of Girl Power will take you on a journey to meet just a handful of women who have helped shape the world we live in today. L...

Over a Century of Girl Power

Over a Century of Girl Power will take you on a journey to meet just a handful of women who have helped shape the world we live in today. L...