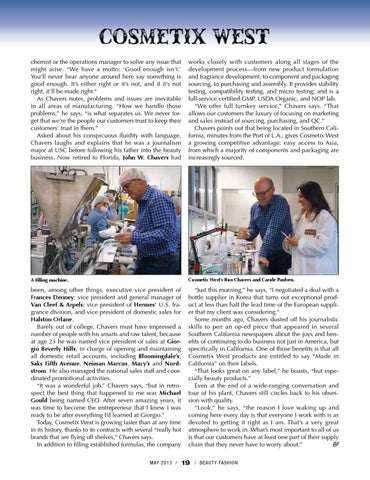 COSMETIX WEST chemist or the operations manager to solve any issue that might arise. “We have a motto: ‘Good enough isn’t.’ You’ll never hear anyone around here say something is good enough. It’s either right or it’s not, and if it’s not right, it’ll be made right.” As Chavers notes, problems and issues are inevitable in all areas of manufacturing. “How we handle those problems,” he says, “is what separates us. We never forget that we’re the people our customers trust to keep their customers’ trust in them.” Asked about his conspicuous fluidity with language, Chavers laughs and explains that he was a journalism major at USC before following his father into the beauty business. Now retired to Florida, John W. Chavers had

works closely with customers along all stages of the development process—from new product formulation and fragrance development, to component and packaging sourcing, to purchasing and assembly. It provides stability testing, compatibility testing, and micro testing; and is a full-service certified GMP, USDA Organic, and NOP lab. “We offer full turnkey service,” Chavers says. “That allows our customers the luxury of focusing on marketing and sales instead of sourcing, purchasing, and QC.” Chavers points out that being located in Southern California, minutes from the Port of L.A., gives Cosmetix West a growing competitive advantage: easy access to Asia, from which a majority of components and packaging are increasingly sourced.

been, among other things, executive vice president of Frances Denney; vice president and general manager of Van Cleef & Arpels; vice president of Hermes’ U.S. fragrance division, and vice president of domestic sales for Halston Orlane. Barely out of college, Chavers must have impressed a number of people with his smarts and raw talent, because at age 23 he was named vice president of sales at Giorgio Beverly Hills, in charge of opening and maintaining all domestic retail accounts, including Bloomingdale’s, Saks Fifth Avenue, Neiman Marcus, Macy’s and Nordstrom. He also managed the national sales staff and coordinated promotional activities. “It was a wonderful job,” Chavers says, “but in retrospect the best thing that happened to me was Michael Gould being named CEO. After seven amazing years, it was time to become the entrepreneur that I knew I was ready to be after everything I’d learned at Giorgio.” Today, Cosmetix West is growing faster than at any time in its history, thanks to its contracts with several “really hot brands that are flying off shelves,” Chavers says. In addition to filling established formulas, the company

“Just this morning,” he says, “I negotiated a deal with a bottle supplier in Korea that turns out exceptional product at less than half the lead time of the European supplier that my client was considering.” Some months ago, Chavers dusted off his journalistic skills to pen an op-ed piece that appeared in several Southern California newspapers about the joys and benefits of continuing to do business not just in America, but specifically in California. One of those benefits is that all Cosmetix West products are entitled to say “Made in California” on their labels. “That looks great on any label,” he boasts, “but especially beauty products.” Even at the end of a wide-ranging conversation and tour of his plant, Chavers still circles back to his obsession with quality. “Look,” he says, “the reason I love waking up and coming here every day is that everyone I work with is as devoted to getting it right as I am. That’s a very great atmosphere to work in. What’s most important to all of us is that our customers have at least one part of their supply chain that they never have to worry about.” BF