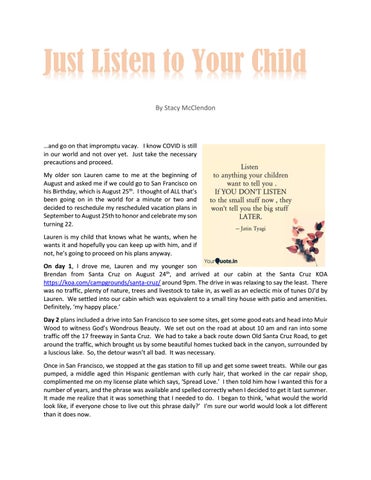 Just Listen to Your Child By Stacy McClendon

…and go on that impromptu vacay. I know COVID is still in our world and not over yet. Just take the necessary precautions and proceed. My older son Lauren came to me at the beginning of August and asked me if we could go to San Francisco on his Birthday, which is August 25th. I thought of ALL that’s been going on in the world for a minute or two and decided to reschedule my rescheduled vacation plans in September to August 25th to honor and celebrate my son turning 22. Lauren is my child that knows what he wants, when he wants it and hopefully you can keep up with him, and if not, he’s going to proceed on his plans anyway. On day 1, I drove me, Lauren and my younger son Brendan from Santa Cruz on August 24th, and arrived at our cabin at the Santa Cruz KOA https://koa.com/campgrounds/santa-cruz/ around 9pm. The drive in was relaxing to say the least. There was no traffic, plenty of nature, trees and livestock to take in, as well as an eclectic mix of tunes DJ’d by Lauren. We settled into our cabin which was equivalent to a small tiny house with patio and amenities. Definitely, ‘my happy place.’ Day 2 plans included a drive into San Francisco to see some sites, get some good eats and head into Muir Wood to witness God’s Wondrous Beauty. We set out on the road at about 10 am and ran into some traffic off the 17 freeway in Santa Cruz. We had to take a back route down Old Santa Cruz Road, to get around the traffic, which brought us by some beautiful homes tucked back in the canyon, surrounded by a luscious lake. So, the detour wasn’t all bad. It was necessary. Once in San Francisco, we stopped at the gas station to fill up and get some sweet treats. While our gas pumped, a middle aged thin Hispanic gentleman with curly hair, that worked in the car repair shop, complimented me on my license plate which says, ‘Spread Love.’ I then told him how I wanted this for a number of years, and the phrase was available and spelled correctly when I decided to get it last summer. It made me realize that it was something that I needed to do. I began to think, ‘what would the world look like, if everyone chose to live out this phrase daily?’ I’m sure our world would look a lot different than it does now. 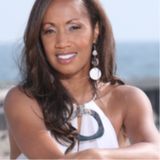 More from Beauty Come Forth- Publisher