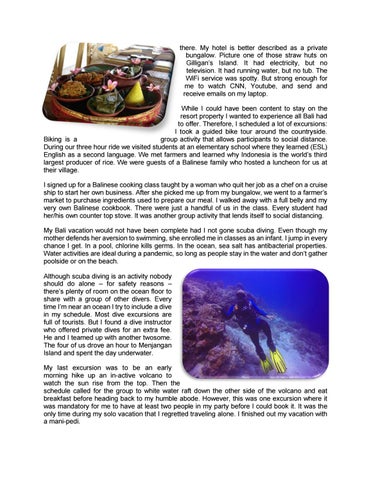 there. My hotel is better described as a private bungalow. Picture one of those straw huts on Gilligan’s Island. It had electricity, but no television. It had running water, but no tub. The WiFi service was spotty. But strong enough for me to watch CNN, Youtube, and send and receive emails on my laptop. While I could have been content to stay on the resort property I wanted to experience all Bali had to offer. Therefore, I scheduled a lot of excursions: I took a guided bike tour around the countryside. Biking is a group activity that allows participants to social distance. During our three hour ride we visited students at an elementary school where they learned (ESL) English as a second language. We met farmers and learned why Indonesia is the world’s third largest producer of rice. We were guests of a Balinese family who hosted a luncheon for us at their village. I signed up for a Balinese cooking class taught by a woman who quit her job as a chef on a cruise ship to start her own business. After she picked me up from my bungalow, we went to a farmer’s market to purchase ingredients used to prepare our meal. I walked away with a full belly and my very own Balinese cookbook. There were just a handful of us in the class. Every student had her/his own counter top stove. It was another group activity that lends itself to social distancing. My Bali vacation would not have been complete had I not gone scuba diving. Even though my mother defends her aversion to swimming, she enrolled me in classes as an infant. I jump in every chance I get. In a pool, chlorine kills germs. In the ocean, sea salt has antibacterial properties. Water activities are ideal during a pandemic, so long as people stay in the water and don’t gather poolside or on the beach. Although scuba diving is an activity nobody should do alone – for safety reasons – there’s plenty of room on the ocean floor to share with a group of other divers. Every time I’m near an ocean I try to include a dive in my schedule. Most dive excursions are full of tourists. But I found a dive instructor who offered private dives for an extra fee. He and I teamed up with another twosome. The four of us drove an hour to Menjangan Island and spent the day underwater. My last excursion was to be an early morning hike up an in-active volcano to watch the sun rise from the top. Then the schedule called for the group to white water raft down the other side of the volcano and eat breakfast before heading back to my humble abode. However, this was one excursion where it was mandatory for me to have at least two people in my party before I could book it. It was the only time during my solo vacation that I regretted traveling alone. I finished out my vacation with a mani-pedi.