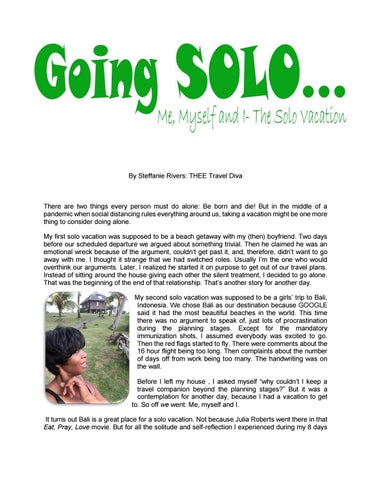 There are two things every person must do alone: Be born and die! But in the middle of a pandemic when social distancing rules everything around us, taking a vacation might be one more thing to consider doing alone. My first solo vacation was supposed to be a beach getaway with my (then) boyfriend. Two days before our scheduled departure we argued about something trivial. Then he claimed he was an emotional wreck because of the argument, couldn’t get past it, and, therefore, didn’t want to go away with me. I thought it strange that we had switched roles. Usually I’m the one who would overthink our arguments. Later, I realized he started it on purpose to get out of our travel plans. Instead of sitting around the house giving each other the silent treatment, I decided to go alone. That was the beginning of the end of that relationship. That’s another story for another day. My second solo vacation was supposed to be a girls’ trip to Bali, Indonesia. We chose Bali as our destination because GOOGLE said it had the most beautiful beaches in the world. This time there was no argument to speak of, just lots of procrastination during the planning stages. Except for the mandatory immunization shots, I assumed everybody was excited to go. Then the red flags started to fly. There were comments about the 16 hour flight being too long. Then complaints about the number of days off from work being too many. The handwriting was on the wall. Before I left my house , I asked myself “why couldn’t I keep a travel companion beyond the planning stages?” But it was a contemplation for another day, because I had a vacation to get to. So off we went: Me, myself and I. It turns out Bali is a great place for a solo vacation. Not because Julia Roberts went there in that Eat, Pray, Love movie. But for all the solitude and self-reflection I experienced during my 8 days