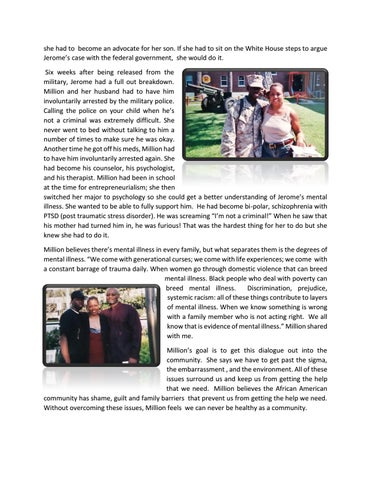 she had to become an advocate for her son. If she had to sit on the White House steps to argue Jerome’s case with the federal government, she would do it. Six weeks after being released from the military, Jerome had a full out breakdown. Million and her husband had to have him involuntarily arrested by the military police. Calling the police on your child when he’s not a criminal was extremely difficult. She never went to bed without talking to him a number of times to make sure he was okay. Another time he got off his meds, Million had to have him involuntarily arrested again. She had become his counselor, his psychologist, and his therapist. Million had been in school at the time for entrepreneurialism; she then switched her major to psychology so she could get a better understanding of Jerome’s mental illness. She wanted to be able to fully support him. He had become bi-polar, schizophrenia with PTSD (post traumatic stress disorder). He was screaming “I’m not a criminal!” When he saw that his mother had turned him in, he was furious! That was the hardest thing for her to do but she knew she had to do it. Million believes there’s mental illness in every family, but what separates them is the degrees of mental illness. “We come with generational curses; we come with life experiences; we come with a constant barrage of trauma daily. When women go through domestic violence that can breed mental illness. Black people who deal with poverty can breed mental illness. Discrimination, prejudice, systemic racism: all of these things contribute to layers of mental illness. When we know something is wrong with a family member who is not acting right. We all know that is evidence of mental illness.” Million shared with me. Million’s goal is to get this dialogue out into the community. She says we have to get past the sigma, the embarrassment , and the environment. All of these issues surround us and keep us from getting the help that we need. Million believes the African American community has shame, guilt and family barriers that prevent us from getting the help we need. Without overcoming these issues, Million feels we can never be healthy as a community.