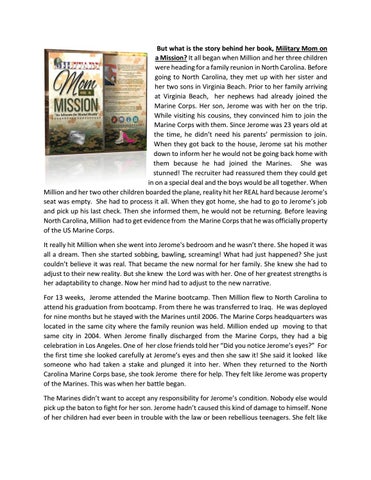 But what is the story behind her book, Military Mom on a Mission? It all began when Million and her three children were heading for a family reunion in North Carolina. Before going to North Carolina, they met up with her sister and her two sons in Virginia Beach. Prior to her family arriving at Virginia Beach, her nephews had already joined the Marine Corps. Her son, Jerome was with her on the trip. While visiting his cousins, they convinced him to join the Marine Corps with them. Since Jerome was 23 years old at the time, he didn’t need his parents’ permission to join. When they got back to the house, Jerome sat his mother down to inform her he would not be going back home with them because he had joined the Marines. She was stunned! The recruiter had reassured them they could get in on a special deal and the boys would be all together. When Million and her two other children boarded the plane, reality hit her REAL hard because Jerome’s seat was empty. She had to process it all. When they got home, she had to go to Jerome’s job and pick up his last check. Then she informed them, he would not be returning. Before leaving North Carolina, Million had to get evidence from the Marine Corps that he was officially property of the US Marine Corps. It really hit Million when she went into Jerome's bedroom and he wasn’t there. She hoped it was all a dream. Then she started sobbing, bawling, screaming! What had just happened? She just couldn’t believe it was real. That became the new normal for her family. She knew she had to adjust to their new reality. But she knew the Lord was with her. One of her greatest strengths is her adaptability to change. Now her mind had to adjust to the new narrative. For 13 weeks, Jerome attended the Marine bootcamp. Then Million flew to North Carolina to attend his graduation from bootcamp. From there he was transferred to Iraq. He was deployed for nine months but he stayed with the Marines until 2006. The Marine Corps headquarters was located in the same city where the family reunion was held. Million ended up moving to that same city in 2004. When Jerome finally discharged from the Marine Corps, they had a big celebration in Los Angeles. One of her close friends told her “Did you notice Jerome’s eyes?” For the first time she looked carefully at Jerome’s eyes and then she saw it! She said it looked like someone who had taken a stake and plunged it into her. When they returned to the North Carolina Marine Corps base, she took Jerome there for help. They felt like Jerome was property of the Marines. This was when her battle began. The Marines didn’t want to accept any responsibility for Jerome’s condition. Nobody else would pick up the baton to fight for her son. Jerome hadn’t caused this kind of damage to himself. None of her children had ever been in trouble with the law or been rebellious teenagers. She felt like