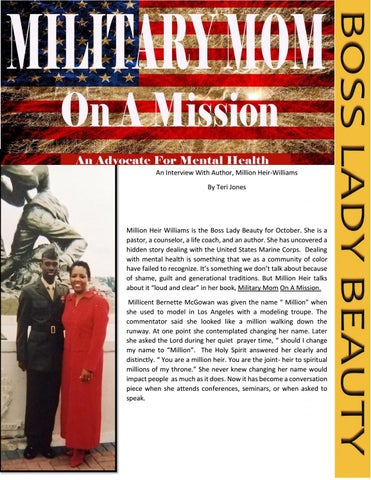 An Interview With Author, Million Heir-Williams By Teri Jones

Million Heir Williams is the Boss Lady Beauty for October. She is a pastor, a counselor, a life coach, and an author. She has uncovered a hidden story dealing with the United States Marine Corps. Dealing with mental health is something that we as a community of color have failed to recognize. It’s something we don’t talk about because of shame, guilt and generational traditions. But Million Heir talks about it “loud and clear” in her book, Military Mom On A Mission. Millicent Bernette McGowan was given the name “ Million” when she used to model in Los Angeles with a modeling troupe. The commentator said she looked like a million walking down the runway. At one point she contemplated changing her name. Later she asked the Lord during her quiet prayer time, “ should I change my name to “Million”. The Holy Spirit answered her clearly and distinctly. “ You are a million heir. You are the joint- heir to spiritual millions of my throne.” She never knew changing her name would impact people as much as it does. Now it has become a conversation piece when she attends conferences, seminars, or when asked to speak.