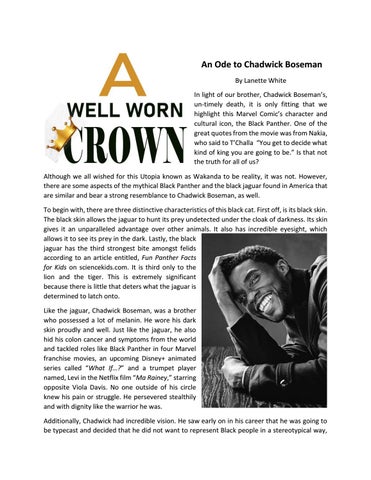 An Ode to Chadwick Boseman By Lanette White In light of our brother, Chadwick Boseman’s, un-timely death, it is only fitting that we highlight this Marvel Comic’s character and cultural icon, the Black Panther. One of the great quotes from the movie was from Nakia, who said to T’Challa “You get to decide what kind of king you are going to be.” Is that not the truth for all of us? Although we all wished for this Utopia known as Wakanda to be reality, it was not. However, there are some aspects of the mythical Black Panther and the black jaguar found in America that are similar and bear a strong resemblance to Chadwick Boseman, as well. To begin with, there are three distinctive characteristics of this black cat. First off, is its black skin. The black skin allows the jaguar to hunt its prey undetected under the cloak of darkness. Its skin gives it an unparalleled advantage over other animals. It also has incredible eyesight, which allows it to see its prey in the dark. Lastly, the black jaguar has the third strongest bite amongst felids according to an article entitled, Fun Panther Facts for Kids on sciencekids.com. It is third only to the lion and the tiger. This is extremely significant because there is little that deters what the jaguar is determined to latch onto. Like the jaguar, Chadwick Boseman, was a brother who possessed a lot of melanin. He wore his dark skin proudly and well. Just like the jaguar, he also hid his colon cancer and symptoms from the world and tackled roles like Black Panther in four Marvel franchise movies, an upcoming Disney+ animated series called “What If…?” and a trumpet player named, Levi in the Netflix film “Ma Rainey,” starring opposite Viola Davis. No one outside of his circle knew his pain or struggle. He persevered stealthily and with dignity like the warrior he was. Additionally, Chadwick had incredible vision. He saw early on in his career that he was going to be typecast and decided that he did not want to represent Black people in a stereotypical way,