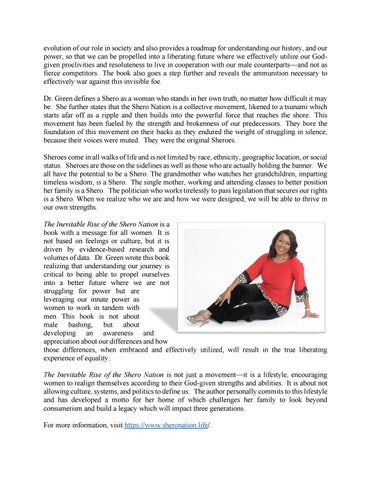 evolution of our role in society and also provides a roadmap for understanding our history, and our power, so that we can be propelled into a liberating future where we effectively utilize our Godgiven proclivities and resoluteness to live in cooperation with our male counterpartsâ&#x20AC;&#x201D;and not as fierce competitors. The book also goes a step further and reveals the ammunition necessary to effectively war against this invisible foe. Dr. Green defines a Shero as a woman who stands in her own truth, no matter how difficult it may be. She further states that the Shero Nation is a collective movement, likened to a tsunami which starts afar off as a ripple and then builds into the powerful force that reaches the shore. This movement has been fueled by the strength and brokenness of our predecessors. They bore the foundation of this movement on their backs as they endured the weight of struggling in silence, because their voices were muted. They were the original Sheroes. Sheroes come in all walks of life and is not limited by race, ethnicity, geographic location, or social status. Sheroes are those on the sidelines as well as those who are actually holding the banner. We all have the potential to be a Shero. The grandmother who watches her grandchildren, imparting timeless wisdom, is a Shero. The single mother, working and attending classes to better position her family is a Shero. The politician who works tirelessly to pass legislation that secures our rights is a Shero. When we realize who we are and how we were designed, we will be able to thrive in our own strengths. The Inevitable Rise of the Shero Nation is a book with a message for all women. It is not based on feelings or culture, but it is driven by evidence-based research and volumes of data. Dr. Green wrote this book realizing that understanding our journey is critical to being able to propel ourselves into a better future where we are not struggling for power but are leveraging our innate power as women to work in tandem with men. This book is not about male bashing, but about developing an awareness and appreciation about our differences and how those differences, when embraced and effectively utilized, will result in the true liberating experience of equality. The Inevitable Rise of the Shero Nation is not just a movementâ&#x20AC;&#x201D;it is a lifestyle, encouraging women to realign themselves according to their God-given strengths and abilities. It is about not allowing culture, systems, and politics to define us. The author personally commits to this lifestyle and has developed a motto for her home of which challenges her family to look beyond consumerism and build a legacy which will impact three generations. For more information, visit https://www.sheronation.life/.