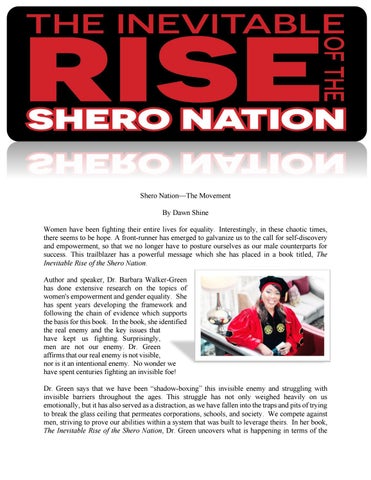 Shero Nationâ&#x20AC;&#x201D;The Movement By Dawn Shine Women have been fighting their entire lives for equality. Interestingly, in these chaotic times, there seems to be hope. A front-runner has emerged to galvanize us to the call for self-discovery and empowerment, so that we no longer have to posture ourselves as our male counterparts for success. This trailblazer has a powerful message which she has placed in a book titled, The Inevitable Rise of the Shero Nation. Author and speaker, Dr. Barbara Walker-Green has done extensive research on the topics of women's empowerment and gender equality. She has spent years developing the framework and following the chain of evidence which supports the basis for this book. In the book, she identified the real enemy and the key issues that have kept us fighting. Surprisingly, men are not our enemy. Dr. Green affirms that our real enemy is not visible, nor is it an intentional enemy. No wonder we have spent centuries fighting an invisible foe! Dr. Green says that we have been â&#x20AC;&#x153;shadow-boxingâ&#x20AC;? this invisible enemy and struggling with invisible barriers throughout the ages. This struggle has not only weighed heavily on us emotionally, but it has also served as a distraction, as we have fallen into the traps and pits of trying to break the glass ceiling that permeates corporations, schools, and society. We compete against men, striving to prove our abilities within a system that was built to leverage theirs. In her book, The Inevitable Rise of the Shero Nation, Dr. Green uncovers what is happening in terms of the