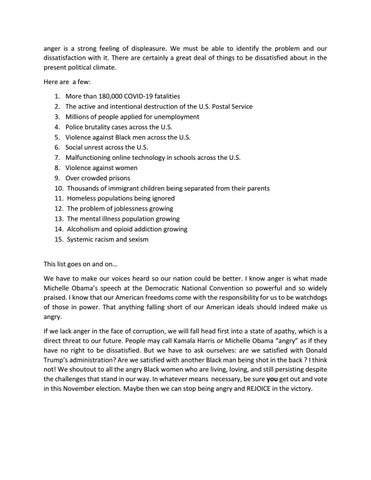 anger is a strong feeling of displeasure. We must be able to identify the problem and our dissatisfaction with it. There are certainly a great deal of things to be dissatisfied about in the present political climate. Here are a few: 1. More than 180,000 COVID-19 fatalities 2. The active and intentional destruction of the U.S. Postal Service 3. Millions of people applied for unemployment 4. Police brutality cases across the U.S. 5. Violence against Black men across the U.S. 6. Social unrest across the U.S. 7. Malfunctioning online technology in schools across the U.S. 8. Violence against women 9. Over crowded prisons 10. Thousands of immigrant children being separated from their parents 11. Homeless populations being ignored 12. The problem of joblessness growing 13. The mental illness population growing 14. Alcoholism and opioid addiction growing 15. Systemic racism and sexism This list goes on and on… We have to make our voices heard so our nation could be better. I know anger is what made Michelle Obama’s speech at the Democratic National Convention so powerful and so widely praised. I know that our American freedoms come with the responsibility for us to be watchdogs of those in power. That anything falling short of our American ideals should indeed make us angry. If we lack anger in the face of corruption, we will fall head first into a state of apathy, which is a direct threat to our future. People may call Kamala Harris or Michelle Obama “angry” as if they have no right to be dissatisfied. But we have to ask ourselves: are we satisfied with Donald Trump’s administration? Are we satisfied with another Black man being shot in the back ? I think not! We shoutout to all the angry Black women who are living, loving, and still persisting despite the challenges that stand in our way. In whatever means necessary, be sure you get out and vote in this November election. Maybe then we can stop being angry and REJOICE in the victory.