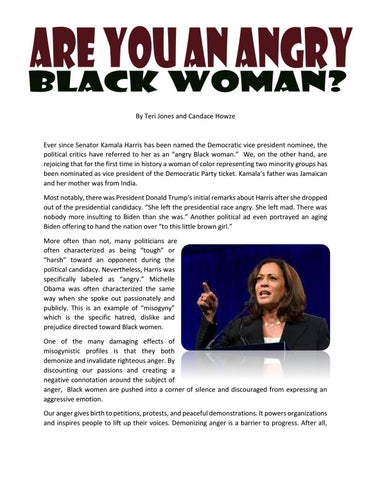 By Teri Jones and Candace Howze

Ever since Senator Kamala Harris has been named the Democratic vice president nominee, the political critics have referred to her as an “angry Black woman.” We, on the other hand, are rejoicing that for the first time in history a woman of color representing two minority groups has been nominated as vice president of the Democratic Party ticket. Kamala’s father was Jamaican and her mother was from India. Most notably, there was President Donald Trump’s initial remarks about Harris after she dropped out of the presidential candidacy. “She left the presidential race angry. She left mad. There was nobody more insulting to Biden than she was.” Another political ad even portrayed an aging Biden offering to hand the nation over “to this little brown girl.” More often than not, many politicians are often characterized as being “tough” or “harsh” toward an opponent during the political candidacy. Nevertheless, Harris was specifically labeled as “angry.” Michelle Obama was often characterized the same way when she spoke out passionately and publicly. This is an example of “misogyny” which is the specific hatred, dislike and prejudice directed toward Black women. One of the many damaging effects of misogynistic profiles is that they both demonize and invalidate righteous anger. By discounting our passions and creating a negative connotation around the subject of anger, Black women are pushed into a corner of silence and discouraged from expressing an aggressive emotion. Our anger gives birth to petitions, protests, and peaceful demonstrations. It powers organizations and inspires people to lift up their voices. Demonizing anger is a barrier to progress. After all,