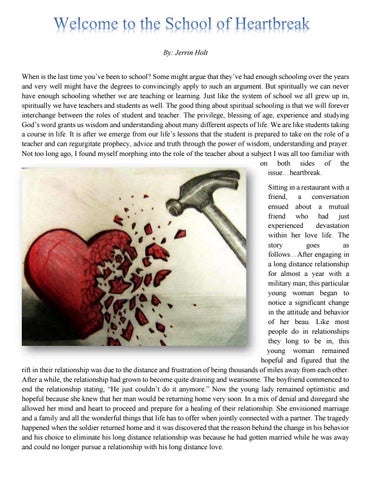 By: Jerrin Holt When is the last time you’ve been to school? Some might argue that they’ve had enough schooling over the years and very well might have the degrees to convincingly apply to such an argument. But spiritually we can never have enough schooling whether we are teaching or learning. Just like the system of school we all grew up in, spiritually we have teachers and students as well. The good thing about spiritual schooling is that we will forever interchange between the roles of student and teacher. The privilege, blessing of age, experience and studying God’s word grants us wisdom and understanding about many different aspects of life. We are like students taking a course in life. It is after we emerge from our life’s lessons that the student is prepared to take on the role of a teacher and can regurgitate prophecy, advice and truth through the power of wisdom, understanding and prayer. Not too long ago, I found myself morphing into the role of the teacher about a subject I was all too familiar with on both sides of the issue…heartbreak. Sitting in a restaurant with a friend, a conversation ensued about a mutual friend who had just experienced devastation within her love life. The story goes as follows…After engaging in a long distance relationship for almost a year with a military man; this particular young woman began to notice a significant change in the attitude and behavior of her beau. Like most people do in relationships they long to be in, this young woman remained hopeful and figured that the rift in their relationship was due to the distance and frustration of being thousands of miles away from each other. After a while, the relationship had grown to become quite draining and wearisome. The boyfriend commenced to end the relationship stating, “He just couldn’t do it anymore.” Now the young lady remained optimistic and hopeful because she knew that her man would be returning home very soon. In a mix of denial and disregard she allowed her mind and heart to proceed and prepare for a healing of their relationship. She envisioned marriage and a family and all the wonderful things that life has to offer when jointly connected with a partner. The tragedy happened when the soldier returned home and it was discovered that the reason behind the change in his behavior and his choice to eliminate his long distance relationship was because he had gotten married while he was away and could no longer pursue a relationship with his long distance love.