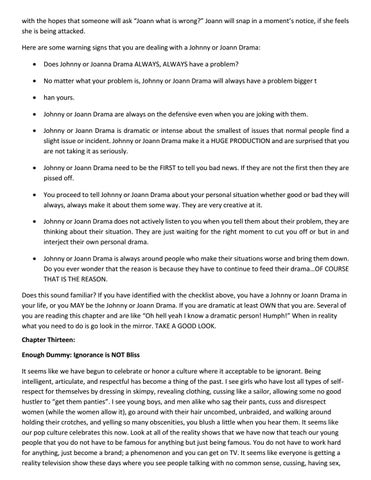 with the hopes that someone will ask “Joann what is wrong?” Joann will snap in a moment’s notice, if she feels she is being attacked. Here are some warning signs that you are dealing with a Johnny or Joann Drama: 

Does Johnny or Joanna Drama ALWAYS, ALWAYS have a problem?

No matter what your problem is, Johnny or Joann Drama will always have a problem bigger t

Johnny or Joann Drama are always on the defensive even when you are joking with them.

Johnny or Joann Drama need to be the FIRST to tell you bad news. If they are not the first then they are pissed off.

You proceed to tell Johnny or Joann Drama about your personal situation whether good or bad they will always, always make it about them some way. They are very creative at it.

Johnny or Joann Drama does not actively listen to you when you tell them about their problem, they are thinking about their situation. They are just waiting for the right moment to cut you off or but in and interject their own personal drama.

Johnny or Joann Drama is always around people who make their situations worse and bring them down. Do you ever wonder that the reason is because they have to continue to feed their drama…OF COURSE THAT IS THE REASON.

Does this sound familiar? If you have identified with the checklist above, you have a Johnny or Joann Drama in your life, or you MAY be the Johnny or Joann Drama. If you are dramatic at least OWN that you are. Several of you are reading this chapter and are like “Oh hell yeah I know a dramatic person! Humph!” When in reality what you need to do is go look in the mirror. TAKE A GOOD LOOK. Chapter Thirteen: Enough Dummy: Ignorance is NOT Bliss It seems like we have begun to celebrate or honor a culture where it acceptable to be ignorant. Being intelligent, articulate, and respectful has become a thing of the past. I see girls who have lost all types of selfrespect for themselves by dressing in skimpy, revealing clothing, cussing like a sailor, allowing some no good hustler to “get them panties”. I see young boys, and men alike who sag their pants, cuss and disrespect women (while the women allow it), go around with their hair uncombed, unbraided, and walking around holding their crotches, and yelling so many obscenities, you blush a little when you hear them. It seems like our pop culture celebrates this now. Look at all of the reality shows that we have now that teach our young people that you do not have to be famous for anything but just being famous. You do not have to work hard for anything, just become a brand; a phenomenon and you can get on TV. It seems like everyone is getting a reality television show these days where you see people talking with no common sense, cussing, having sex,