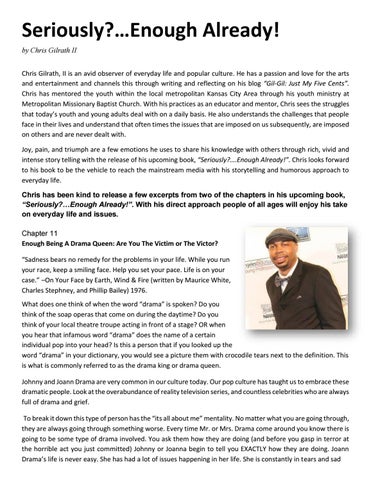 Seriously?…Enough Already! by Chris Gilrath II Chris Gilrath, II is an avid observer of everyday life and popular culture. He has a passion and love for the arts and entertainment and channels this through writing and reflecting on his blog “Gil-Gil: Just My Five Cents”. Chris has mentored the youth within the local metropolitan Kansas City Area through his youth ministry at Metropolitan Missionary Baptist Church. With his practices as an educator and mentor, Chris sees the struggles that today’s youth and young adults deal with on a daily basis. He also understands the challenges that people face in their lives and understand that often times the issues that are imposed on us subsequently, are imposed on others and are never dealt with. Joy, pain, and triumph are a few emotions he uses to share his knowledge with others through rich, vivid and intense story telling with the release of his upcoming book, “Seriously?….Enough Already!”. Chris looks forward to his book to be the vehicle to reach the mainstream media with his storytelling and humorous approach to everyday life. Chris has been kind to release a few excerpts from two of the chapters in his upcoming book, “Seriously?…Enough Already!”. With his direct approach people of all ages will enjoy his take on everyday life and issues. Chapter 11 Enough Being A Drama Queen: Are You The Victim or The Victor? “Sadness bears no remedy for the problems in your life. While you run your race, keep a smiling face. Help you set your pace. Life is on your case.” –On Your Face by Earth, Wind & Fire (written by Maurice White, Charles Stephney, and Phillip Bailey) 1976. What does one think of when the word “drama” is spoken? Do you think of the soap operas that come on during the daytime? Do you think of your local theatre troupe acting in front of a stage? OR when you hear that infamous word “drama” does the name of a certain individual pop into your head? Is this a person that if you looked up the word “drama” in your dictionary, you would see a picture them with crocodile tears next to the definition. This is what is commonly referred to as the drama king or drama queen. Johnny and Joann Drama are very common in our culture today. Our pop culture has taught us to embrace these dramatic people. Look at the overabundance of reality television series, and countless celebrities who are always full of drama and grief. To break it down this type of person has the “its all about me” mentality. No matter what you are going through, they are always going through something worse. Every time Mr. or Mrs. Drama come around you know there is going to be some type of drama involved. You ask them how they are doing (and before you gasp in terror at the horrible act you just committed) Johnny or Joanna begin to tell you EXACTLY how they are doing. Joann Drama’s life is never easy. She has had a lot of issues happening in her life. She is constantly in tears and sad