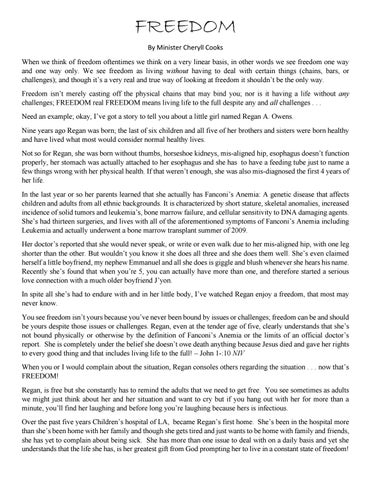 FREEDOM By Minister Cheryll Cooks When we think of freedom oftentimes we think on a very linear basis, in other words we see freedom one way and one way only. We see freedom as living without having to deal with certain things (chains, bars, or challenges); and though it’s a very real and true way of looking at freedom it shouldn’t be the only way. Freedom isn’t merely casting off the physical chains that may bind you; nor is it having a life without any challenges; FREEDOM real FREEDOM means living life to the full despite any and all challenges . . . Need an example; okay, I’ve got a story to tell you about a little girl named Regan A. Owens. Nine years ago Regan was born; the last of six children and all five of her brothers and sisters were born healthy and have lived what most would consider normal healthy lives. Not so for Regan, she was born without thumbs, horseshoe kidneys, mis-aligned hip, esophagus doesn’t function properly, her stomach was actually attached to her esophagus and she has to have a feeding tube just to name a few things wrong with her physical health. If that weren’t enough, she was also mis-diagnosed the first 4 years of her life. In the last year or so her parents learned that she actually has Fanconi’s Anemia: A genetic disease that affects children and adults from all ethnic backgrounds. It is characterized by short stature, skeletal anomalies, increased incidence of solid tumors and leukemia’s, bone marrow failure, and cellular sensitivity to DNA damaging agents. She’s had thirteen surgeries, and lives with all of the aforementioned symptoms of Fanconi’s Anemia including Leukemia and actually underwent a bone marrow transplant summer of 2009. Her doctor’s reported that she would never speak, or write or even walk due to her mis-aligned hip, with one leg shorter than the other. But wouldn’t you know it she does all three and she does them well. She’s even claimed herself a little boyfriend, my nephew Emmanuel and all she does is giggle and blush whenever she hears his name. Recently she’s found that when you’re 5, you can actually have more than one, and therefore started a serious love connection with a much older boyfriend J’yon. In spite all she’s had to endure with and in her little body, I’ve watched Regan enjoy a freedom, that most may never know. You see freedom isn’t yours because you’ve never been bound by issues or challenges; freedom can be and should be yours despite those issues or challenges. Regan, even at the tender age of five, clearly understands that she’s not bound physically or otherwise by the definition of Fanconi’s Anemia or the limits of an official doctor’s report. She is completely under the belief she doesn’t owe death anything because Jesus died and gave her rights to every good thing and that includes living life to the full! – John 1-:10 NIV When you or I would complain about the situation, Regan consoles others regarding the situation . . . now that’s FREEDOM! Regan, is free but she constantly has to remind the adults that we need to get free. You see sometimes as adults we might just think about her and her situation and want to cry but if you hang out with her for more than a minute, you’ll find her laughing and before long you’re laughing because hers is infectious. Over the past five years Children’s hospital of LA, became Regan’s first home. She’s been in the hospital more than she’s been home with her family and though she gets tired and just wants to be home with family and friends, she has yet to complain about being sick. She has more than one issue to deal with on a daily basis and yet she understands that the life she has, is her greatest gift from God prompting her to live in a constant state of freedom!