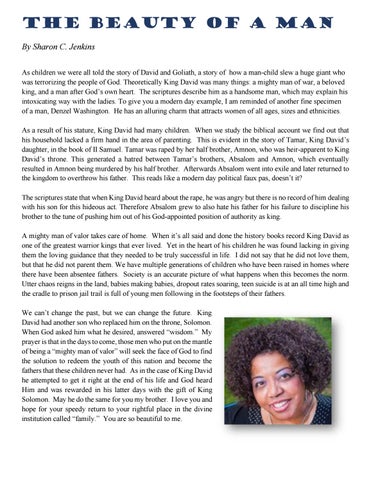 The Beauty of a Man By Sharon C. Jenkins As children we were all told the story of David and Goliath, a story of how a man-child slew a huge giant who was terrorizing the people of God. Theoretically King David was many things: a mighty man of war, a beloved king, and a man after God’s own heart. The scriptures describe him as a handsome man, which may explain his intoxicating way with the ladies. To give you a modern day example, I am reminded of another fine specimen of a man, Denzel Washington. He has an alluring charm that attracts women of all ages, sizes and ethnicities. As a result of his stature, King David had many children. When we study the biblical account we find out that his household lacked a firm hand in the area of parenting. This is evident in the story of Tamar, King David’s daughter, in the book of II Samuel. Tamar was raped by her half brother, Amnon, who was heir-apparent to King David’s throne. This generated a hatred between Tamar’s brothers, Absalom and Amnon, which eventually resulted in Amnon being murdered by his half brother. Afterwards Absalom went into exile and later returned to the kingdom to overthrow his father. This reads like a modern day political faux pas, doesn’t it? The scriptures state that when King David heard about the rape, he was angry but there is no record of him dealing with his son for this hideous act. Therefore Absalom grew to also hate his father for his failure to discipline his brother to the tune of pushing him out of his God-appointed position of authority as king. A mighty man of valor takes care of home. When it’s all said and done the history books record King David as one of the greatest warrior kings that ever lived. Yet in the heart of his children he was found lacking in giving them the loving guidance that they needed to be truly successful in life. I did not say that he did not love them, but that he did not parent them. We have multiple generations of children who have been raised in homes where there have been absentee fathers. Society is an accurate picture of what happens when this becomes the norm. Utter chaos reigns in the land, babies making babies, dropout rates soaring, teen suicide is at an all time high and the cradle to prison jail trail is full of young men following in the footsteps of their fathers. We can’t change the past, but we can change the future. King David had another son who replaced him on the throne, Solomon. When God asked him what he desired, answered “wisdom.” My prayer is that in the days to come, those men who put on the mantle of being a “mighty man of valor” will seek the face of God to find the solution to redeem the youth of this nation and become the fathers that these children never had. As in the case of King David he attempted to get it right at the end of his life and God heard Him and was rewarded in his latter days with the gift of King Solomon. May he do the same for you my brother. I love you and hope for your speedy return to your rightful place in the divine institution called “family.” You are so beautiful to me.