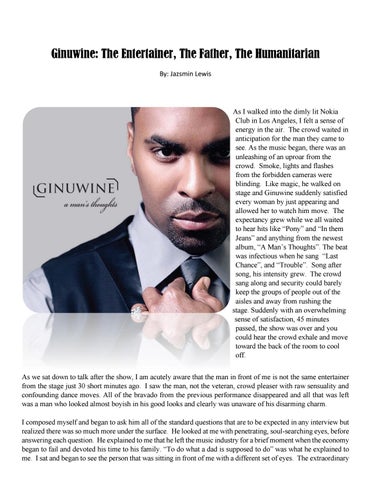 Ginuwine: The Entertainer, The Father, The Humanitarian By: Jazsmin Lewis

As I walked into the dimly lit Nokia Club in Los Angeles, I felt a sense of energy in the air. The crowd waited in anticipation for the man they came to see. As the music began, there was an unleashing of an uproar from the crowd. Smoke, lights and flashes from the forbidden cameras were blinding. Like magic, he walked on stage and Ginuwine suddenly satisfied every woman by just appearing and allowed her to watch him move. The expectancy grew while we all waited to hear hits like “Pony” and “In them Jeans” and anything from the newest album, “A Man’s Thoughts”. The beat was infectious when he sang “Last Chance”, and “Trouble”. Song after song, his intensity grew. The crowd sang along and security could barely keep the groups of people out of the aisles and away from rushing the stage. Suddenly with an overwhelming sense of satisfaction, 45 minutes passed, the show was over and you could hear the crowd exhale and move toward the back of the room to cool off. As we sat down to talk after the show, I am acutely aware that the man in front of me is not the same entertainer from the stage just 30 short minutes ago. I saw the man, not the veteran, crowd pleaser with raw sensuality and confounding dance moves. All of the bravado from the previous performance disappeared and all that was left was a man who looked almost boyish in his good looks and clearly was unaware of his disarming charm. I composed myself and began to ask him all of the standard questions that are to be expected in any interview but realized there was so much more under the surface. He looked at me with penetrating, soul-searching eyes, before answering each question. He explained to me that he left the music industry for a brief moment when the economy began to fail and devoted his time to his family. “To do what a dad is supposed to do” was what he explained to me. I sat and began to see the person that was sitting in front of me with a different set of eyes. The extraordinary