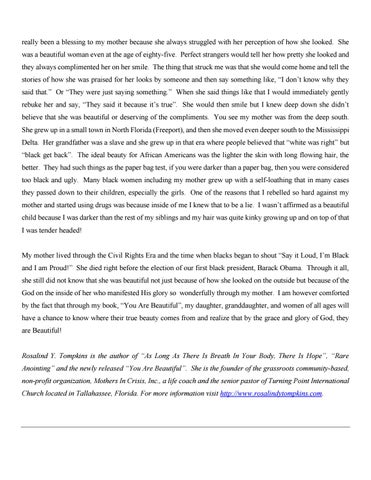 really been a blessing to my mother because she always struggled with her perception of how she looked. She was a beautiful woman even at the age of eighty-five. Perfect strangers would tell her how pretty she looked and they always complimented her on her smile. The thing that struck me was that she would come home and tell the stories of how she was praised for her looks by someone and then say something like, “I don’t know why they said that.” Or “They were just saying something.” When she said things like that I would immediately gently rebuke her and say, “They said it because it’s true”. She would then smile but I knew deep down she didn’t believe that she was beautiful or deserving of the compliments. You see my mother was from the deep south. She grew up in a small town in North Florida (Freeport), and then she moved even deeper south to the Mississippi Delta. Her grandfather was a slave and she grew up in that era where people believed that “white was right” but “black get back”. The ideal beauty for African Americans was the lighter the skin with long flowing hair, the better. They had such things as the paper bag test, if you were darker than a paper bag, then you were considered too black and ugly. Many black women including my mother grew up with a self-loathing that in many cases they passed down to their children, especially the girls. One of the reasons that I rebelled so hard against my mother and started using drugs was because inside of me I knew that to be a lie. I wasn’t affirmed as a beautiful child because I was darker than the rest of my siblings and my hair was quite kinky growing up and on top of that I was tender headed! My mother lived through the Civil Rights Era and the time when blacks began to shout “Say it Loud, I’m Black and I am Proud!” She died right before the election of our first black president, Barack Obama. Through it all, she still did not know that she was beautiful not just because of how she looked on the outside but because of the God on the inside of her who manifested His glory so wonderfully through my mother. I am however comforted by the fact that through my book, “You Are Beautiful”, my daughter, granddaughter, and women of all ages will have a chance to know where their true beauty comes from and realize that by the grace and glory of God, they are Beautiful! Rosalind Y. Tompkins is the author of “As Long As There Is Breath In Your Body, There Is Hope”, “Rare Anointing” and the newly released “You Are Beautiful”. She is the founder of the grassroots community-based, non-profit organization, Mothers In Crisis, Inc., a life coach and the senior pastor of Turning Point International Church located in Tallahassee, Florida. For more information visit http://www.rosalindytompkins.com.