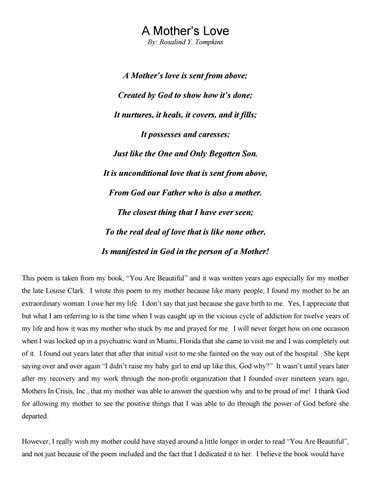 A Mother’s love is sent from above; Created by God to show how it’s done; It nurtures, it heals, it covers, and it fills; It possesses and caresses; Just like the One and Only Begotten Son. It is unconditional love that is sent from above, From God our Father who is also a mother. The closest thing that I have ever seen; To the real deal of love that is like none other, Is manifested in God in the person of a Mother! This poem is taken from my book, “You Are Beautiful” and it was written years ago especially for my mother the late Louise Clark. I wrote this poem to my mother because like many people, I found my mother to be an extraordinary woman. I owe her my life. I don’t say that just because she gave birth to me. Yes, I appreciate that but what I am referring to is the time when I was caught up in the vicious cycle of addiction for twelve years of my life and how it was my mother who stuck by me and prayed for me. I will never forget how on one occasion when I was locked up in a psychiatric ward in Miami, Florida that she came to visit me and I was completely out of it. I found out years later that after that initial visit to me she fainted on the way out of the hospital. She kept saying over and over again “I didn’t raise my baby girl to end up like this, God why?” It wasn’t until years later after my recovery and my work through the non-profit organization that I founded over nineteen years ago, Mothers In Crisis, Inc., that my mother was able to answer the question why and to be proud of me! I thank God for allowing my mother to see the positive things that I was able to do through the power of God before she departed. However, I really wish my mother could have stayed around a little longer in order to read “You Are Beautiful”, and not just because of the poem included and the fact that I dedicated it to her. I believe the book would have