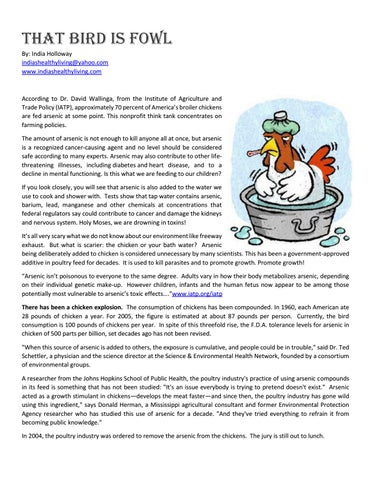 According to Dr. David Wallinga, from the Institute of Agriculture and Trade Policy (IATP), approximately 70 percent of America’s broiler chickens are fed arsenic at some point. This nonprofit think tank concentrates on farming policies. The amount of arsenic is not enough to kill anyone all at once, but arsenic is a recognized cancer-causing agent and no level should be considered safe according to many experts. Arsenic may also contribute to other lifethreatening illnesses, including diabetes and heart disease, and to a decline in mental functioning. Is this what we are feeding to our children? If you look closely, you will see that arsenic is also added to the water we use to cook and shower with. Tests show that tap water contains arsenic, barium, lead, manganese and other chemicals at concentrations that federal regulators say could contribute to cancer and damage the kidneys and nervous system. Holy Moses, we are drowning in toxins! It’s all very scary what we do not know about our environment like freeway exhaust. But what is scarier: the chicken or your bath water? Arsenic being deliberately added to chicken is considered unnecessary by many scientists. This has been a government-approved additive in poultry feed for decades. It is used to kill parasites and to promote growth. Promote growth! “Arsenic isn’t poisonous to everyone to the same degree. Adults vary in how their body metabolizes arsenic, depending on their individual genetic make-up. However children, infants and the human fetus now appear to be among those potentially most vulnerable to arsenic’s toxic effects….”www.iatp.org/iatp There has been a chicken explosion. The consumption of chickens has been compounded. In 1960, each American ate 28 pounds of chicken a year. For 2005, the figure is estimated at about 87 pounds per person. Currently, the bird consumption is 100 pounds of chickens per year. In spite of this threefold rise, the F.D.A. tolerance levels for arsenic in chicken of 500 parts per billion, set decades ago has not been revised. "When this source of arsenic is added to others, the exposure is cumulative, and people could be in trouble," said Dr. Ted Schettler, a physician and the science director at the Science & Environmental Health Network, founded by a consortium of environmental groups. A researcher from the Johns Hopkins School of Public Health, the poultry industry's practice of using arsenic compounds in its feed is something that has not been studied: "It's an issue everybody is trying to pretend doesn't exist." Arsenic acted as a growth stimulant in chickens—develops the meat faster—and since then, the poultry industry has gone wild using this ingredient," says Donald Herman, a Mississippi agricultural consultant and former Environmental Protection Agency researcher who has studied this use of arsenic for a decade. "And they've tried everything to refrain it from becoming public knowledge." In 2004, the poultry industry was ordered to remove the arsenic from the chickens. The jury is still out to lunch.