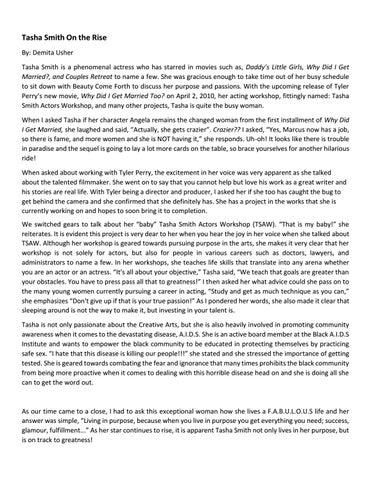 Tasha Smith On the Rise By: Demita Usher Tasha Smith is a phenomenal actress who has starred in movies such as, Daddy’s Little Girls, Why Did I Get Married?, and Couples Retreat to name a few. She was gracious enough to take time out of her busy schedule to sit down with Beauty Come Forth to discuss her purpose and passions. With the upcoming release of Tyler Perry’s new movie, Why Did I Get Married Too? on April 2, 2010, her acting workshop, fittingly named: Tasha Smith Actors Workshop, and many other projects, Tasha is quite the busy woman. When I asked Tasha if her character Angela remains the changed woman from the first installment of Why Did I Get Married, she laughed and said, “Actually, she gets crazier”. Crazier?? I asked, “Yes, Marcus now has a job, so there is fame, and more women and she is NOT having it,” she responds. Uh-oh! It looks like there is trouble in paradise and the sequel is going to lay a lot more cards on the table, so brace yourselves for another hilarious ride! When asked about working with Tyler Perry, the excitement in her voice was very apparent as she talked about the talented filmmaker. She went on to say that you cannot help but love his work as a great writer and his stories are real life. With Tyler being a director and producer, I asked her if she too has caught the bug to get behind the camera and she confirmed that she definitely has. She has a project in the works that she is currently working on and hopes to soon bring it to completion. We switched gears to talk about her “baby” Tasha Smith Actors Workshop (TSAW). “That is my baby!” she reiterates. It is evident this project is very dear to her when you hear the joy in her voice when she talked about TSAW. Although her workshop is geared towards pursuing purpose in the arts, she makes it very clear that her workshop is not solely for actors, but also for people in various careers such as doctors, lawyers, and administrators to name a few. In her workshops, she teaches life skills that translate into any arena whether you are an actor or an actress. “It's all about your objective,” Tasha said, “We teach that goals are greater than your obstacles. You have to press pass all that to greatness!” I then asked her what advice could she pass on to the many young women currently pursuing a career in acting, “Study and get as much technique as you can,” she emphasizes “Don't give up if that is your true passion!” As I pondered her words, she also made it clear that sleeping around is not the way to make it, but investing in your talent is. Tasha is not only passionate about the Creative Arts, but she is also heavily involved in promoting community awareness when it comes to the devastating disease, A.I.D.S. She is an active board member at the Black A.I.D.S Institute and wants to empower the black community to be educated in protecting themselves by practicing safe sex. “I hate that this disease is killing our people!!!” she stated and she stressed the importance of getting tested. She is geared towards combating the fear and ignorance that many times prohibits the black community from being more proactive when it comes to dealing with this horrible disease head on and she is doing all she can to get the word out.

As our time came to a close, I had to ask this exceptional woman how she lives a F.A.B.U.L.O.U.S life and her answer was simple, “Living in purpose, because when you live in purpose you get everything you need; success, glamour, fulfillment...” As her star continues to rise, it is apparent Tasha Smith not only lives in her purpose, but is on track to greatness!