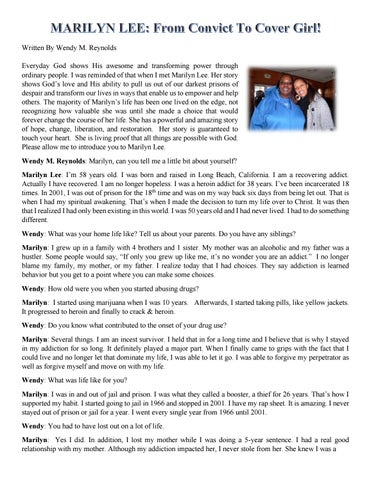 Written By Wendy M. Reynolds Everyday God shows His awesome and transforming power through ordinary people. I was reminded of that when I met Marilyn Lee. Her story shows God’s love and His ability to pull us out of our darkest prisons of despair and transform our lives in ways that enable us to empower and help others. The majority of Marilyn’s life has been one lived on the edge, not recognizing how valuable she was until she made a choice that would forever change the course of her life. She has a powerful and amazing story of hope, change, liberation, and restoration. Her story is guaranteed to touch your heart. She is living proof that all things are possible with God. Please allow me to introduce you to Marilyn Lee. Wendy M. Reynolds: Marilyn, can you tell me a little bit about yourself? Marilyn Lee: I’m 58 years old. I was born and raised in Long Beach, California. I am a recovering addict. Actually I have recovered. I am no longer hopeless. I was a heroin addict for 38 years. I’ve been incarcerated 18 times. In 2001, I was out of prison for the 18th time and was on my way back six days from being let out. That is when I had my spiritual awakening. That’s when I made the decision to turn my life over to Christ. It was then that I realized I had only been existing in this world. I was 50 years old and I had never lived. I had to do something different. Wendy: What was your home life like? Tell us about your parents. Do you have any siblings? Marilyn: I grew up in a family with 4 brothers and 1 sister. My mother was an alcoholic and my father was a hustler. Some people would say, “If only you grew up like me, it’s no wonder you are an addict.” I no longer blame my family, my mother, or my father. I realize today that I had choices. They say addiction is learned behavior but you get to a point where you can make some choices. Wendy: How old were you when you started abusing drugs? Marilyn: I started using marijuana when I was 10 years. Afterwards, I started taking pills, like yellow jackets. It progressed to heroin and finally to crack & heroin. Wendy: Do you know what contributed to the onset of your drug use? Marilyn: Several things. I am an incest survivor. I held that in for a long time and I believe that is why I stayed in my addiction for so long. It definitely played a major part. When I finally came to grips with the fact that I could live and no longer let that dominate my life, I was able to let it go. I was able to forgive my perpetrator as well as forgive myself and move on with my life. Wendy: What was life like for you? Marilyn: I was in and out of jail and prison. I was what they called a booster, a thief for 26 years. That’s how I supported my habit. I started going to jail in 1966 and stopped in 2001. I have my rap sheet. It is amazing. I never stayed out of prison or jail for a year. I went every single year from 1966 until 2001. Wendy: You had to have lost out on a lot of life. Marilyn: Yes I did. In addition, I lost my mother while I was doing a 5-year sentence. I had a real good relationship with my mother. Although my addiction impacted her, I never stole from her. She knew I was a