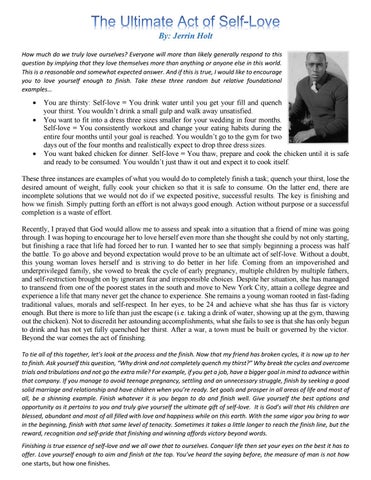 By: Jerrin Holt How much do we truly love ourselves? Everyone will more than likely generally respond to this question by implying that they love themselves more than anything or anyone else in this world. This is a reasonable and somewhat expected answer. And if this is true, I would like to encourage you to love yourself enough to finish. Take these three random but relative foundational examples…

You are thirsty: Self-love = You drink water until you get your fill and quench your thirst. You wouldn’t drink a small gulp and walk away unsatisfied. You want to fit into a dress three sizes smaller for your wedding in four months. Self-love = You consistently workout and change your eating habits during the entire four months until your goal is reached. You wouldn’t go to the gym for two days out of the four months and realistically expect to drop three dress sizes. You want baked chicken for dinner. Self-love = You thaw, prepare and cook the chicken until it is safe and ready to be consumed. You wouldn’t just thaw it out and expect it to cook itself.

These three instances are examples of what you would do to completely finish a task; quench your thirst, lose the desired amount of weight, fully cook your chicken so that it is safe to consume. On the latter end, there are incomplete solutions that we would not do if we expected positive, successful results. The key is finishing and how we finish. Simply putting forth an effort is not always good enough. Action without purpose or a successful completion is a waste of effort. Recently, I prayed that God would allow me to assess and speak into a situation that a friend of mine was going through. I was hoping to encourage her to love herself even more than she thought she could by not only starting, but finishing a race that life had forced her to run. I wanted her to see that simply beginning a process was half the battle. To go above and beyond expectation would prove to be an ultimate act of self-love. Without a doubt, this young woman loves herself and is striving to do better in her life. Coming from an impoverished and underprivileged family, she vowed to break the cycle of early pregnancy, multiple children by multiple fathers, and self-restriction brought on by ignorant fear and irresponsible choices. Despite her situation, she has managed to transcend from one of the poorest states in the south and move to New York City, attain a college degree and experience a life that many never get the chance to experience. She remains a young woman rooted in fast-fading traditional values, morals and self-respect. In her eyes, to be 24 and achieve what she has thus far is victory enough. But there is more to life than just the escape (i.e. taking a drink of water, showing up at the gym, thawing out the chicken). Not to discredit her astounding accomplishments, what she fails to see is that she has only begun to drink and has not yet fully quenched her thirst. After a war, a town must be built or governed by the victor. Beyond the war comes the act of finishing. To tie all of this together, let’s look at the process and the finish. Now that my friend has broken cycles, it is now up to her to finish. Ask yourself this question, “Why drink and not completely quench my thirst?” Why break the cycles and overcome trials and tribulations and not go the extra mile? For example, if you get a job, have a bigger goal in mind to advance within that company. If you manage to avoid teenage pregnancy, settling and an unnecessary struggle, finish by seeking a good solid marriage and relationship and have children when you’re ready. Set goals and prosper in all areas of life and most of all, be a shinning example. Finish whatever it is you began to do and finish well. Give yourself the best options and opportunity as it pertains to you and truly give yourself the ultimate gift of self-love. It is God’s will that His children are blessed, abundant and most of all filled with love and happiness while on this earth. With the same vigor you bring to war in the beginning, finish with that same level of tenacity. Sometimes it takes a little longer to reach the finish line, but the reward, recognition and self-pride that finishing and winning affords victory beyond words. Finishing is true essence of self-love and we all owe that to ourselves. Conquer life then set your eyes on the best it has to offer. Love yourself enough to aim and finish at the top. You’ve heard the saying before, the measure of man is not how one starts, but how one finishes.