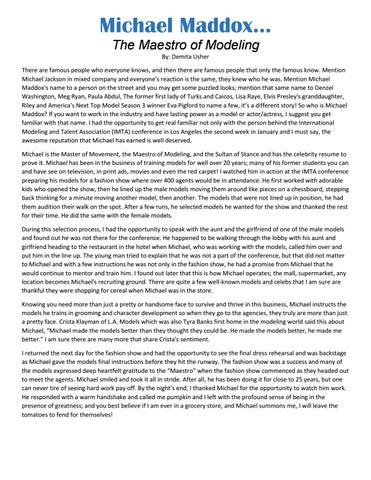 Michael Maddox… The Maestro of Modeling By: Demita Usher There are famous people who everyone knows, and then there are famous people that only the famous know. Mention Michael Jackson in mixed company and everyone's reaction is the same, they knew who he was. Mention Michael Maddox's name to a person on the street and you may get some puzzled looks; mention that same name to Denzel Washington, Meg Ryan, Paula Abdul, The former first lady of Turks and Caicos, Lisa Raye, Elvis Presley's granddaughter, Riley and America's Next Top Model Season 3 winner Eva Pigford to name a few, it’s a different story! So who is Michael Maddox? If you want to work in the industry and have lasting power as a model or actor/actress, I suggest you get familiar with that name. I had the opportunity to get real familiar not only with the person behind the International Modeling and Talent Association (IMTA) conference in Los Angeles the second week in January and I must say, the awesome reputation that Michael has earned is well deserved. Michael is the Master of Movement, the Maestro of Modeling, and the Sultan of Stance and has the celebrity resume to prove it. Michael has been in the business of training models for well over 20 years; many of his former students you can and have see on television, in print ads, movies and even the red carpet! I watched him in action at the IMTA conference preparing his models for a fashion show where over 400 agents would be in attendance. He first worked with adorable kids who opened the show, then he lined up the male models moving them around like pieces on a chessboard, stepping back thinking for a minute moving another model, then another. The models that were not lined up in position, he had them audition their walk on the spot. After a few runs, he selected models he wanted for the show and thanked the rest for their time. He did the same with the female models. During this selection process, I had the opportunity to speak with the aunt and the girlfriend of one of the male models and found out he was not there for the conference. He happened to be walking through the lobby with his aunt and girlfriend heading to the restaurant in the hotel when Michael, who was working with the models, called him over and put him in the line up. The young man tried to explain that he was not a part of the conference, but that did not matter to Michael and with a few instructions he was not only in the fashion show, he had a promise from Michael that he would continue to mentor and train him. I found out later that this is how Michael operates; the mall, supermarket, any location becomes Michael's recruiting ground. There are quite a few well-known models and celebs that I am sure are thankful they were shopping for cereal when Michael was in the store. Knowing you need more than just a pretty or handsome face to survive and thrive in this business, Michael instructs the models he trains in grooming and character development so when they go to the agencies, they truly are more than just a pretty face. Crista Klayman of L.A. Models which was also Tyra Banks first home in the modeling world said this about Michael, “Michael made the models better than they thought they could be. He made the models better, he made me better.” I am sure there are many more that share Crista's sentiment. I returned the next day for the fashion show and had the opportunity to see the final dress rehearsal and was backstage as Michael gave the models final instructions before they hit the runway. The fashion show was a success and many of the models expressed deep heartfelt gratitude to the “Maestro” when the fashion show commenced as they headed out to meet the agents. Michael smiled and took it all in stride. After all, he has been doing it for close to 25 years, but one can never tire of seeing hard work pay off. By the night’s end, I thanked Michael for the opportunity to watch him work. He responded with a warm handshake and called me pumpkin and I left with the profound sense of being in the presence of greatness; and you best believe if I am ever in a grocery store, and Michael summons me, I will leave the tomatoes to fend for themselves!