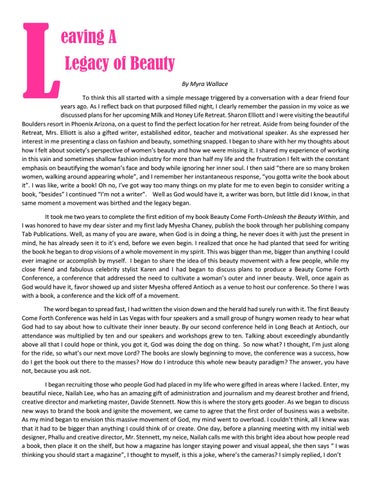 eaving A Legacy of Beauty By Myra Wallace

To think this all started with a simple message triggered by a conversation with a dear friend four years ago. As I reflect back on that purposed filled night, I clearly remember the passion in my voice as we discussed plans for her upcoming Milk and Honey Life Retreat. Sharon Elliott and I were visiting the beautiful Boulders resort in Phoenix Arizona, on a quest to find the perfect location for her retreat. Aside from being founder of the Retreat, Mrs. Elliott is also a gifted writer, established editor, teacher and motivational speaker. As she expressed her interest in me presenting a class on fashion and beauty, something snapped. I began to share with her my thoughts about how I felt about society’s perspective of women’s beauty and how we were missing it. I shared my experience of working in this vain and sometimes shallow fashion industry for more than half my life and the frustration I felt with the constant emphasis on beautifying the woman’s face and body while ignoring her inner soul. I then said “there are so many broken women, walking around appearing whole”, and I remember her instantaneous response, “you gotta write the book about it”. I was like, write a book! Oh no, I’ve got way too many things on my plate for me to even begin to consider writing a book, “besides” I continued “I’m not a writer”. Well as God would have it, a writer was born, but little did I know, in that same moment a movement was birthed and the legacy began. It took me two years to complete the first edition of my book Beauty Come Forth-Unleash the Beauty Within, and I was honored to have my dear sister and my first lady Myesha Chaney, publish the book through her publishing company Tab Publications. Well, as many of you are aware, when God is in doing a thing, he never does it with just the present in mind, he has already seen it to it’s end, before we even begin. I realized that once he had planted that seed for writing the book he began to drop visions of a whole movement in my spirit. This was bigger than me, bigger than anything I could ever imagine or accomplish by myself. I began to share the idea of this beauty movement with a few people, while my close friend and fabulous celebrity stylist Karen and I had began to discuss plans to produce a Beauty Come Forth Conference, a conference that addressed the need to cultivate a woman’s outer and inner beauty. Well, once again as God would have it, favor showed up and sister Myesha offered Antioch as a venue to host our conference. So there I was with a book, a conference and the kick off of a movement. The word began to spread fast, I had written the vision down and the herald had surely run with it. The first Beauty Come Forth Conference was held in Las Vegas with four speakers and a small group of hungry women ready to hear what God had to say about how to cultivate their inner beauty. By our second conference held in Long Beach at Antioch, our attendance was multiplied by ten and our speakers and workshops grew to ten. Talking about exceedingly abundantly above all that I could hope or think, you got it, God was doing the dog on thing. So now what? I thought, I’m just along for the ride, so what’s our next move Lord? The books are slowly beginning to move, the conference was a success, how do I get the book out there to the masses? How do I introduce this whole new beauty paradigm? The answer, you have not, because you ask not. I began recruiting those who people God had placed in my life who were gifted in areas where I lacked. Enter, my beautiful niece, Nailah Lee, who has an amazing gift of administration and journalism and my dearest brother and friend, creative director and marketing master, Davide Stennett. Now this is where the story gets gooder. As we began to discuss new ways to brand the book and ignite the movement, we came to agree that the first order of business was a website. As my mind began to envision this massive movement of God, my mind went to overload. I couldn’t think, all I knew was that it had to be bigger than anything I could think of or create. One day, before a planning meeting with my initial web designer, Phallu and creative director, Mr. Stennett, my neice, Nailah calls me with this bright idea about how people read a book, then place it on the shelf, but how a magazine has longer staying power and visual appeal, she then says “ I was thinking you should start a magazine”, I thought to myself, is this a joke, where’s the cameras? I simply replied, I don’t