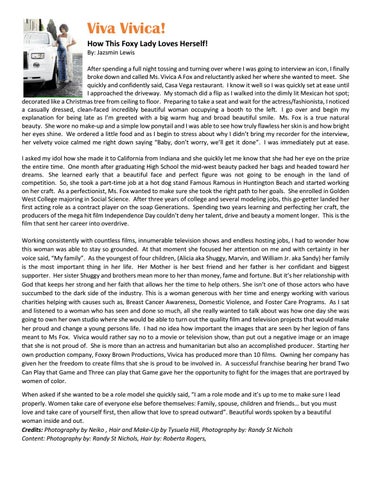 Viva Vivica! How This Foxy Lady Loves Herself! By: Jazsmin Lewis After spending a full night tossing and turning over where I was going to interview an icon, I finally broke down and called Ms. Vivica A Fox and reluctantly asked her where she wanted to meet. She quickly and confidently said, Casa Vega restaurant. I know it well so I was quickly set at ease until I approached the driveway. My stomach did a flip as I walked into the dimly lit Mexican hot spot; decorated like a Christmas tree from ceiling to floor. Preparing to take a seat and wait for the actress/fashionista, I noticed a casually dressed, clean-faced incredibly beautiful woman occupying a booth to the left. I go over and begin my explanation for being late as I’m greeted with a big warm hug and broad beautiful smile. Ms. Fox is a true natural beauty. She wore no make-up and a simple low ponytail and I was able to see how truly flawless her skin is and how bright her eyes shine. We ordered a little food and as I begin to stress about why I didn’t bring my recorder for the interview, her velvety voice calmed me right down saying “Baby, don’t worry, we’ll get it done”. I was immediately put at ease. I asked my idol how she made it to California from Indiana and she quickly let me know that she had her eye on the prize the entire time. One month after graduating High School the mid-west beauty packed her bags and headed toward her dreams. She learned early that a beautiful face and perfect figure was not going to be enough in the land of competition. So, she took a part-time job at a hot dog stand Famous Ramous in Huntington Beach and started working on her craft. As a perfectionist, Ms. Fox wanted to make sure she took the right path to her goals. She enrolled in Golden West College majoring in Social Science. After three years of college and several modeling jobs, this go-getter landed her first acting role as a contract player on the soap Generations. Spending two years learning and perfecting her craft, the producers of the mega hit film Independence Day couldn’t deny her talent, drive and beauty a moment longer. This is the film that sent her career into overdrive. Working consistently with countless films, innumerable television shows and endless hosting jobs, I had to wonder how this woman was able to stay so grounded. At that moment she focused her attention on me and with certainty in her voice said, “My family”. As the youngest of four children, (Alicia aka Shuggy, Marvin, and William Jr. aka Sandy) her family is the most important thing in her life. Her Mother is her best friend and her father is her confidant and biggest supporter. Her sister Shuggy and brothers mean more to her than money, fame and fortune. But it’s her relationship with God that keeps her strong and her faith that allows her the time to help others. She isn’t one of those actors who have succumbed to the dark side of the industry. This is a woman generous with her time and energy working with various charities helping with causes such as, Breast Cancer Awareness, Domestic Violence, and Foster Care Programs. As I sat and listened to a woman who has seen and done so much, all she really wanted to talk about was how one day she was going to own her own studio where she would be able to turn out the quality film and television projects that would make her proud and change a young persons life. I had no idea how important the images that are seen by her legion of fans meant to Ms Fox. Vivica would rather say no to a movie or television show, than put out a negative image or an image that she is not proud of. She is more than an actress and humanitarian but also an accomplished producer. Starting her own production company, Foxxy Brown Productions, Vivica has produced more than 10 films. Owning her company has given her the freedom to create films that she is proud to be involved in. A successful franchise bearing her brand Two Can Play that Game and Three can play that Game gave her the opportunity to fight for the images that are portrayed by women of color. When asked if she wanted to be a role model she quickly said, “I am a role mode and it’s up to me to make sure I lead properly. Women take care of everyone else before themselves: Family, spouse, children and friends… but you must love and take care of yourself first, then allow that love to spread outward”. Beautiful words spoken by a beautiful woman inside and out. Credits: Photography by Neiko , Hair and Make-Up by Tysuela Hill, Photography by: Randy St Nichols Content: Photography by: Randy St Nichols, Hair by: Roberta Rogers,