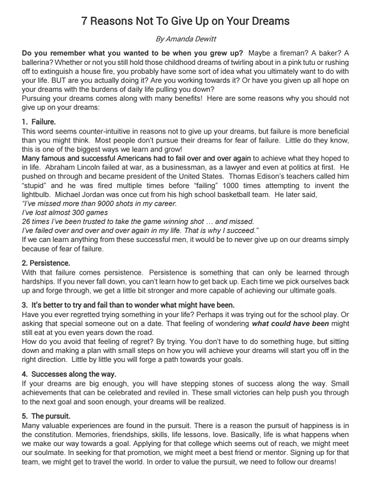 7 Reasons Not To Give Up on Your Dreams By Amanda Dewitt Do you remember what you wanted to be when you grew up? Maybe a fireman? A baker? A ballerina? Whether or not you still hold those childhood dreams of twirling about in a pink tutu or rushing off to extinguish a house fire, you probably have some sort of idea what you ultimately want to do with your life. BUT are you actually doing it? Are you working towards it? Or have you given up all hope on your dreams with the burdens of daily life pulling you down? Pursuing your dreams comes along with many benefits! Here are some reasons why you should not give up on your dreams: 1. Failure. This word seems counter-intuitive in reasons not to give up your dreams, but failure is more beneficial than you might think. Most people don’t pursue their dreams for fear of failure. Little do they know, this is one of the biggest ways we learn and grow! Many famous and successful Americans had to fail over and over again to achieve what they hoped to in life. Abraham Lincoln failed at war, as a businessman, as a lawyer and even at politics at first. He pushed on through and became president of the United States. Thomas Edison’s teachers called him “stupid” and he was fired multiple times before “failing” 1000 times attempting to invent the lightbulb. Michael Jordan was once cut from his high school basketball team. He later said, “I’ve missed more than 9000 shots in my career. I’ve lost almost 300 games 26 times I’ve been trusted to take the game winning shot … and missed. I’ve failed over and over and over again in my life. That is why I succeed.” If we can learn anything from these successful men, it would be to never give up on our dreams simply because of fear of failure. 2. Persistence. With that failure comes persistence. Persistence is something that can only be learned through hardships. If you never fall down, you can’t learn how to get back up. Each time we pick ourselves back up and forge through, we get a little bit stronger and more capable of achieving our ultimate goals. 3. It’s better to try and fail than to wonder what might have been. Have you ever regretted trying something in your life? Perhaps it was trying out for the school play. Or asking that special someone out on a date. That feeling of wondering what could have been might still eat at you even years down the road. How do you avoid that feeling of regret? By trying. You don’t have to do something huge, but sitting down and making a plan with small steps on how you will achieve your dreams will start you off in the right direction. Little by little you will forge a path towards your goals. 4. Successes along the way. If your dreams are big enough, you will have stepping stones of success along the way. Small achievements that can be celebrated and reviled in. These small victories can help push you through to the next goal and soon enough, your dreams will be realized. 5. The pursuit. Many valuable experiences are found in the pursuit. There is a reason the pursuit of happiness is in the constitution. Memories, friendships, skills, life lessons, love. Basically, life is what happens when we make our way towards a goal. Applying for that college which seems out of reach, we might meet our soulmate. In seeking for that promotion, we might meet a best friend or mentor. Signing up for that team, we might get to travel the world. In order to value the pursuit, we need to follow our dreams!