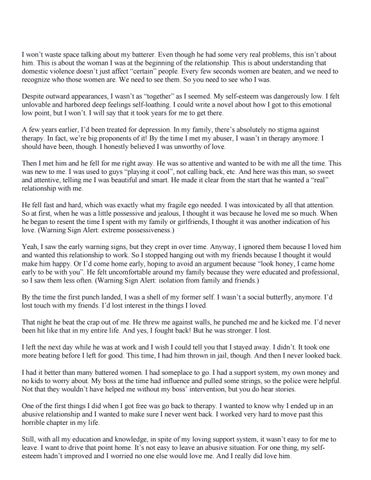 I won’t waste space talking about my batterer. Even though he had some very real problems, this isn’t about him. This is about the woman I was at the beginning of the relationship. This is about understanding that domestic violence doesn’t just affect “certain” people. Every few seconds women are beaten, and we need to recognize who those women are. We need to see them. So you need to see who I was. Despite outward appearances, I wasn’t as “together” as I seemed. My self-esteem was dangerously low. I felt unlovable and harbored deep feelings self-loathing. I could write a novel about how I got to this emotional low point, but I won’t. I will say that it took years for me to get there. A few years earlier, I’d been treated for depression. In my family, there’s absolutely no stigma against therapy. In fact, we’re big proponents of it! By the time I met my abuser, I wasn’t in therapy anymore. I should have been, though. I honestly believed I was unworthy of love. Then I met him and he fell for me right away. He was so attentive and wanted to be with me all the time. This was new to me. I was used to guys “playing it cool”, not calling back, etc. And here was this man, so sweet and attentive, telling me I was beautiful and smart. He made it clear from the start that he wanted a “real” relationship with me. He fell fast and hard, which was exactly what my fragile ego needed. I was intoxicated by all that attention. So at first, when he was a little possessive and jealous, I thought it was because he loved me so much. When he began to resent the time I spent with my family or girlfriends, I thought it was another indication of his love. (Warning Sign Alert: extreme possessiveness.) Yeah, I saw the early warning signs, but they crept in over time. Anyway, I ignored them because I loved him and wanted this relationship to work. So I stopped hanging out with my friends because I thought it would make him happy. Or I’d come home early, hoping to avoid an argument because “look honey, I came home early to be with you”. He felt uncomfortable around my family because they were educated and professional, so I saw them less often. (Warning Sign Alert: isolation from family and friends.) By the time the first punch landed, I was a shell of my former self. I wasn’t a social butterfly, anymore. I’d lost touch with my friends. I’d lost interest in the things I loved. That night he beat the crap out of me. He threw me against walls, he punched me and he kicked me. I’d never been hit like that in my entire life. And yes, I fought back! But he was stronger. I lost. I left the next day while he was at work and I wish I could tell you that I stayed away. I didn’t. It took one more beating before I left for good. This time, I had him thrown in jail, though. And then I never looked back. I had it better than many battered women. I had someplace to go. I had a support system, my own money and no kids to worry about. My boss at the time had influence and pulled some strings, so the police were helpful. Not that they wouldn’t have helped me without my boss’ intervention, but you do hear stories. One of the first things I did when I got free was go back to therapy. I wanted to know why I ended up in an abusive relationship and I wanted to make sure I never went back. I worked very hard to move past this horrible chapter in my life. Still, with all my education and knowledge, in spite of my loving support system, it wasn’t easy to for me to leave. I want to drive that point home. It’s not easy to leave an abusive situation. For one thing, my selfesteem hadn’t improved and I worried no one else would love me. And I really did love him.