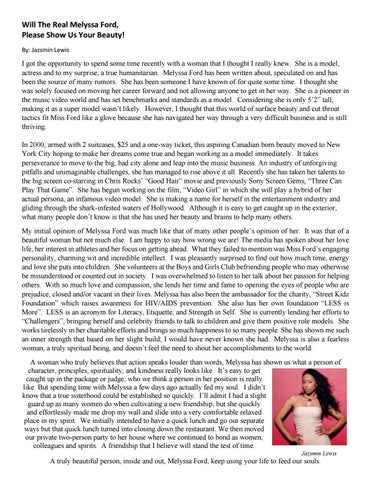 Will The Real Melyssa Ford, Please Show Us Your Beauty! By: Jazsmin Lewis

I got the opportunity to spend some time recently with a woman that I thought I really knew. She is a model, actress and to my surprise, a true humanitarian. Melyssa Ford has been written about, speculated on and has been the source of many rumors. She has been someone I have known of for quite some time. I thought she was solely focused on moving her career forward and not allowing anyone to get in her way. She is a pioneer in the music video world and has set benchmarks and standards as a model. Considering she is only 5’2” tall, making it as a super model wasn’t likely. However, I thought that this world of surface beauty and cut throat tactics fit Miss Ford like a glove because she has navigated her way through a very difficult business and is still thriving. In 2000, armed with 2 suitcases, $25 and a one-way ticket, this aspiring Canadian born beauty moved to New York City hoping to make her dreams come true and began working as a model immediately. It takes perseverance to move to the big, bad city alone and leap into the music business. An industry of unforgiving pitfalls and unimaginable challenges, she has managed to rise above it all. Recently she has taken her talents to the big screen co-starring in Chris Rocks’ “Good Hair” movie and previously Sony Screen Gems, “Three Can Play That Game”. She has begun working on the film, “Video Girl” in which she will play a hybrid of her actual persona, an infamous video model. She is making a name for herself in the entertainment industry and gliding through the shark-infested waters of Hollywood. Although it is easy to get caught up in the exterior, what many people don’t know is that she has used her beauty and brains to help many others. My initial opinion of Melyssa Ford was much like that of many other people’s opinion of her. It was that of a beautiful woman but not much else. I am happy to say how wrong we are! The media has spoken about her love life, her interest in athletes and her focus on getting ahead. What they failed to mention was Miss Ford’s engaging personality, charming wit and incredible intellect. I was pleasantly surprised to find out how much time, energy and love she puts into children. She volunteers at the Boys and Girls Club befriending people who may otherwise be misunderstood or counted out in society. I was overwhelmed to listen to her talk about her passion for helping others. With so much love and compassion, she lends her time and fame to opening the eyes of people who are prejudice, closed and/or vacant in their lives. Melyssa has also been the ambassador for the charity, “Street Kidz Foundation” which raises awareness for HIV/AIDS prevention. She also has her own foundation “LESS is More”. LESS is an acronym for Literacy, Etiquette, and Strength in Self. She is currently lending her efforts to “Challengers”, bringing herself and celebrity friends to talk to children and give them positive role models. She works tirelessly in her charitable efforts and brings so much happiness to so many people. She has shown me such an inner strength that based on her slight build; I would have never known she had. Melyssa is also a fearless woman, a truly spiritual being, and doesn’t feel the need to shout her accomplishments to the world. A woman who truly believes that action speaks louder than words, Melyssa has shown us what a person of character, principles, spirituality, and kindness really looks like. It’s easy to get caught up in the package or judge, who we think a person in her position is really like. But spending time with Melyssa a few days ago actually fed my soul. I didn’t know that a true sisterhood could be established so quickly. I’ll admit I had a slight guard up as many women do when cultivating a new friendship, but she quickly and effortlessly made me drop my wall and slide into a very comfortable relaxed place in my spirit. We initially intended to have a quick lunch and go our separate ways but that quick lunch turned into closing down the restaurant. We then moved our private two-person party to her house where we continued to bond as women, colleagues and spirits. A friendship that I believe will stand the test of time. Jazsmin Lewis

A truly beautiful person, inside and out, Melyssa Ford, keep using your life to feed our souls.